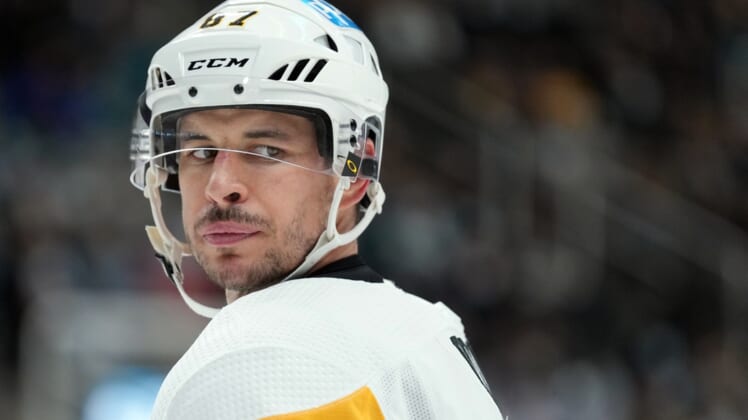 Sidney Crosby notched the only goal in a shootout Sunday as the Pittsburgh Penguins erased a two-goal deficit to win their fifth straight game, 3-2 over the visiting Winnipeg Jets.

After Pittsburgh got goals from Kasperi Kapanen and Jeff Carter nine seconds apart in the third period for a 2-2 tie, Crosby, the Penguins’ second shooter, flipped the puck past the glove of Jets goaltender Connor Hellebuyck in the shootout.

Penguins goaltender Tristan Jarry stopped all three Jets shots he faced in the shootout after making 27 saves through overtime.

Blake Wheeler had a goal and an assist, Kyle Connor also scored, and Mark Scheifele had an assist for Winnipeg, which lost its fourth in a row (0-2-2).

Hellebuyck, making his 11th straight start and second in two days, made 36 saves through the end of overtime.

Penguins center Teddy Blueger left in the first period. He was bleeding heavily after being hit into the boards by the Jets’ Brenden Dillon. Blueger made it to the bench and dressing room on his own. No penalty was assessed on the hit, and there was no immediate word on the status of Blueger.

Wheeler, in his second game back after a knee injury, opened the scoring at 3:28 of the first. From the left hash marks, he unleashed a backhander that rose over Jarry’s glove.

Pittsburgh’s Brian Boyle and Winnipeg’s Nathan Beaulieu fought with 54.5 seconds left in the first after Beaulieu hit the Penguins’ Brock McGinn into the boards.

At 8:11 of the second period on a power play, Connor picked up his team-leading 22nd goal to increase Winnipeg’s lead to 2-0. From the left dot, he lifted a shot past Jarry and inside the near post.

Kapanen broke through for the Penguins at 6:55 of the third. A shot from the left circle by Evgeni Malkin went in off Kapanen’s skate in front to cut it to 2-1.

Nine seconds later, Carter tied the score. At the bottom of the right circle, he picked off a clearing attempt by Hellebuyck and, before the goalie could get fully back into position, he launched a shot that went in off Hellebuyck’s right skate.