Penguins’ stars are clicking ahead of matchup with Sabres 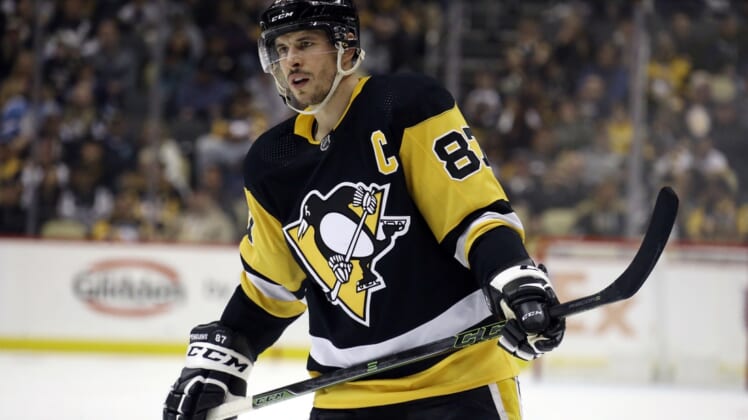 Don’t try to tell the Pittsburgh Penguins they are surging at the right time of the season heading into a road game on Wednesday against the Buffalo Sabres.

The Penguins won for the fifth time in six games on Tuesday, a 5-1 decision against the visiting Columbus Blue Jackets.

Pittsburgh coach Mike Sullivan would not cop to a feeling of momentum building within the team as it heads into the stretch run with the Metropolitan Division title still within reach.

Since a three-game losing streak in late February, the Penguins are 8-2-1.

Leading the way are the team’s marquee forwards. Jake Guentzel scored twice Tuesday, his 30th and 31st goals of the season. Sidney Crosby notched three assists against Columbus, giving him 30 points over the past 21 games. Evgeni Malkin went through a dry spell but now has goals in back-to-back games.

Buffalo, with essentially no chance to move up enough to make the playoffs, was in position to be a seller leading up to Monday’s NHL trade deadline.

Players such as goaltender Craig Anderson, forwards Cody Eakin and Vinnie Hinostroza and defensemen Mark Pysyk and Colin Miller seemed likely to be shipped off, and perhaps others. It’s happened in other years.

Instead, the Sabres stood pat.

“The predominant feel is ahead,” said Buffalo coach Don Granato, who got the job on an interim basis one year ago this week and was given the role permanently in June. “Looking ahead is so exciting. And the excitement ahead is how much better these guys can still get.”

The Sabres can be expected to play some young players but also to show some trust in some of the older mainstays.

The game Wednesday will be Buffalo’s first since the trade deadline. General manager Kevyn Adams pointed to the team’s recent games as a sign of things to come.

The Sabres had won two in a row before they imploded Thursday in a 6-1 loss to the Edmonton Oilers in the opener of a three-game western Canada road trip. They bounced back to edge the Calgary Flames 1-0 in overtime the following night and then beat the Vancouver Canucks 3-2 in overtime on Sunday.

“‘Maturity’ is the word I’d use for it,” Adams said. “To look inside the locker room and say, ‘OK, that wasn’t good enough in Edmonton. Why wasn’t it good enough?’ Well, the answer is within the room. And now let’s figure it out.

“And that’s a huge step for us to go into two tough buildings and (against) very good teams and to answer the way our group did. … Those experiences can exponentially jump you forward.”