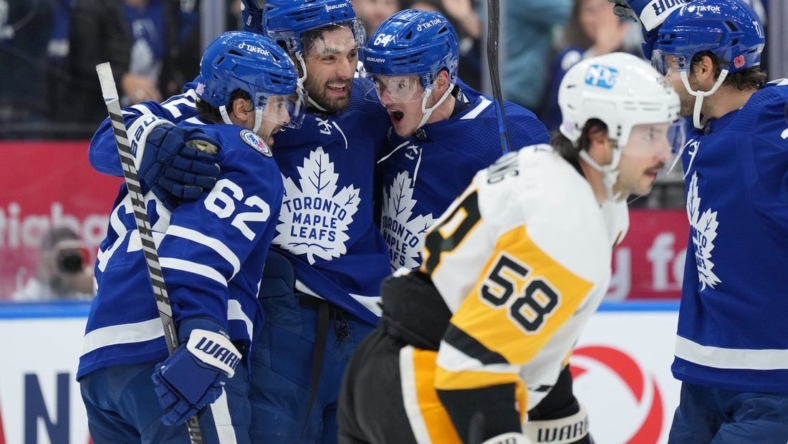 Brock McGinn scored the go-ahead goal early in the third period and the visiting Pittsburgh Penguins went on to defeat the Toronto Maple Leafs 4-2 on Friday night.

Evgeni Malkin had a goal and an assist for Pittsburgh. Jason Zucker and Jake Guentzel also scored for the Penguins, who have won two straight after losing seven in a row.

Zach-Aston Reese and William Nylander scored for Toronto in the annual Hall of Fame game.

Erik Kallgren made 19 saves for the Maple Leafs, who have lost two in a row.

Pittsburgh capitalized on a Toronto turnover to take the lead at 1:54 of the third period. Danton Heinen set up McGinn, who shot from the right circle for his third goal of the season.

Aston-Reese, a former Penguin, pounced on a loose puck after Denis Malgin’s shot toward the net to score his second goal of the season at 13:49 of the first period. David Kampf also earned an assist.

Malkin, who took two minor penalties during the first period, scored his sixth goal of the season at 19:24 of the first. It came after Chad Ruhwedel’s shot bounced off Toronto defenseman TJ Brodie.

Toronto had a 10-7 advantage in shots on goal after one period.

Malkin’s spinning backhand pass set up Zucker’s fourth goal of the season on a laser from the right hash mark at 1:08 of the second period. Marcus Pettersson also earned an assist.

About one minute after he hit the goal post during a power play, Nylander converted a pass from Morgan Rielly for his sixth goal of the season at 17:17 of the second to tie the game 2-2. Kris Letang was serving a tripping penalty. Mitchell Marner also notched an assist.

Toronto led 26-15 in shots on goal after two periods.

After McGinn’s go-ahead goal, Zucker came close at 10:54 of the third, but his shot was deflected wide.

Guentzel scored into the empty net for his eighth goal of the season at 19:47 of the third.

Former Maple Leafs defenseman Borje Salming was given a long ovation before the game.