Penguins slip past Blues in shootout 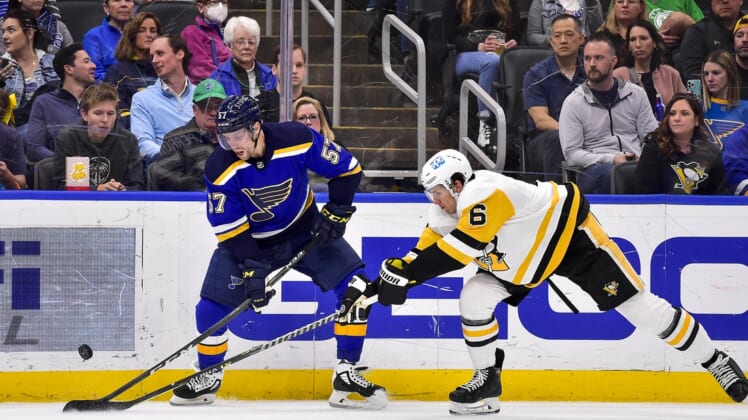 Chad Ruhwedel and Mike Matheson scored in regulation for the Penguins, and Tristan Jarry made 23 saves. Jarry added two stops in the shootout, and the Blues missed the target twice.

Ivan Barbashev paced the Blues’ offense with a goal and an assist, and David Perron also scored. Ville Husso, who finished with 43 saves, stopped the first three Penguins attempts in the shootout before Rust beat him.

The Penguins took two penalties in the first minute of the game, giving the Blues a two-man advantage for 1:34. But Pittsburgh, which has the NHL’s third-ranked penalty-killing unit, survived with Jarry making four early saves.

Ruhwedel put the Penguins up 1-0 with 5:18 to play in the first period. Pittsburgh won an offensive-zone draw, and Marcus Pettersson slid the puck to Ruhwedel for a slap shot from the center point through traffic.

The Penguins controlled much of the second period while outshooting the Blues 17-6.

Husso stopped Teddy Blueger on a two-on-one, short-handed rush early in the period, but he got beat by Matheson’s sharp-angle goal from the left side at 10:52 of the middle period.

Perron cut Pittsburgh’s lead to 2-1 with 3:05 left in the second. He rushed up the left wing, then cut across the top of the crease and lifted the puck over Jarry.

Perron extended his goal-scoring streak to five games. He has six goals and an assist during that span.

The Blues started fast in the third period and tied the game 2-2 at the 1:49 mark. Brandon Saad circled the back of the net and slid a pass through the crease to Barbashev for a tap-in.

Blues defenseman Torey Krug had the best scoring chance for either team in overtime, but he hit the right post on a two-on-one break.