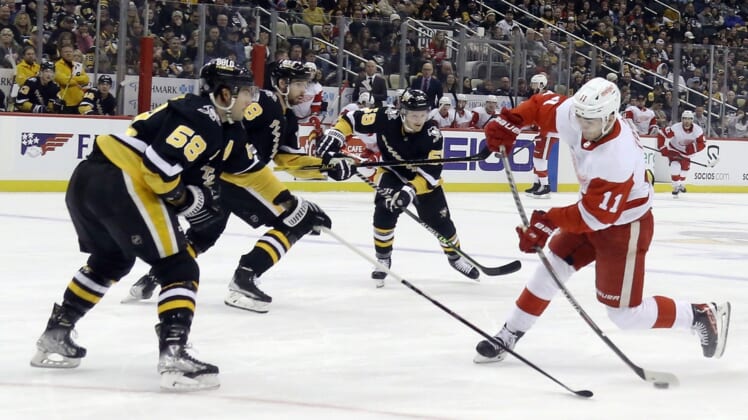 Evgeni Malkin had a hat trick plus an assist Sunday as the Pittsburgh Penguins clobbered the visiting Detroit Red Wings 11-2 to set a team high for goals this season.

Also for Pittsburgh, Teddy Blueger added a goal and three assists; Sidney Crosby, Bryan Rust and Rickard Rakell each had a goal and two assists; Jeff Carter and Danton Heinen notched a goal and an assist; and Kasperi Kapanen and Brian Boyle scored.

Dylan Larkin and Jakub Vrana scored for the Red Wings, who have dropped three straight (0-2-1).

Detroit goaltender Alex Nedeljkovic allowed four goals on 12 shots and was replaced by Calvin Pickard, who gave up four goals on 13 shots. Pickard left with an undisclosed injury in the third, and Nedeljkovic gave up three more goals.

Kapenen got things started at 4:16 of the first when he went backhand to forehand and thoroughly fooled Nedeljkovic. At 14:23 of the first, Blueger made it 2-0 when he lifted the puck under the crossbar.

Malkin — back after missing a game because of a non-COVID illness — scored during a power play at 1:48 of the second period to make it 3-0. Carter finished a shorthanded two-on-one with Blueger at 3:18 to push it to 4-0 and chase Nedeljkovic.

Malkin scored a highlight goal, weaving past Detroit’s Sam Gagner and Adam Erne and scoring from the left hash marks to make it 6-0 and give the Penguins four goals in less than five minutes.

Crosby closed the second-period scoring on a back-door play from Evan Rodrigues with 38.6 seconds left for a 7-2 lead. Heinen added another power-play goal, at 2:06 of the third.

After Pickard left, Malkin completed his hat trick at 5:51 of the third to make it 9-2.