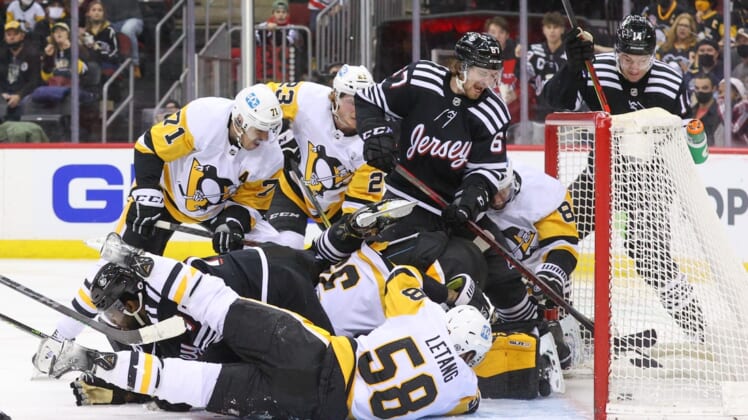 Feb 13, 2022; Newark, New Jersey, USA; Players from the New Jersey Devils and the Pittsburgh Penguins crash the net as the puck goes in during the second period at Prudential Center. The goal was disallowed. Mandatory Credit: Ed Mulholland-USA TODAY Sports

Both teams will be rested Thursday night when the New Jersey Devils visit the Pittsburgh Penguins.

Pittsburgh has had a three-day respite and has played one game in six days, while New Jersey has been off since Feb. 15.

The Penguins are looking to break a two-game losing streak, which might be a downer coming on the heels of four straight wins, but coach Mike Sullivan promises no overreacting.

“We’re going to see things for what they are, and we’re going to look for ways to grow and improve and get better,” Sullivan said. “That’s always been our approach. We’re never going to be a team that’s satisfied with where we’re at regardless of where we sit in the standings or whether we win or lose.

“For me, I always believe that the season is a journey for this team, and we’re going to embrace the journey.”

Pittsburgh’s two recent losses came against teams sitting solidly in position to make the playoffs — 4-1 at Toronto on Thursday and 4-3 against Carolina on Sunday.

“We know that the last two games maybe weren’t our best,” Penguins defenseman Chad Ruhwedel said. “We had some good moments in those games. We were fighting. But we know that we have better.

“So if we just stay the course and realize that there are some areas that we need to work on and need to fix, we’ll be ready for Jersey on Thursday.”

Entering the teams’ fourth and final meeting of the season, Pittsburgh holds a 2-1 edge so far, including a 4-2 win on Feb. 13.

The Devils are dealing with an extra-long layoff. All team schedules were revamped after the NHL initially was slated to shut down for the Olympics, then the teams used the time this month instead to reschedule games that had been postponed because of COVID-19.

“It’s been a lot different. You don’t really have that opportunity during the year,” New Jersey forward Dawson Mercer said. “Usually, I like playing a lot, like going, going, and I was enjoying it, but it is nice to take some time, regroup and restart.”

The Devils used the time for a mix of practices and rest days.

“The energy’s been good,” New Jersey coach Lindy Ruff said. “The practices have been longer.”

Like the Penguins, New Jersey has lost two in a row. Losing has been too common for the Devils, the last-place team in the Metropolitan Division, but the break offered something of a reset.

“We need some results on the ice,” forward Jack Hughes said. “We don’t want to keep losing games like we’ve been losing. We want to win some games, and that’s what it’s all about.”

The time off also has given defenseman Dougie Hamilton a chance to get close enough to returning from surgery for a broken jaw that he could play Thursday. He has been out since Jan. 2.

“Everyone’s excited to start playing again,” Hamilton said. “We had good days of practice working on things, and I think we should be ready to play when it comes.”