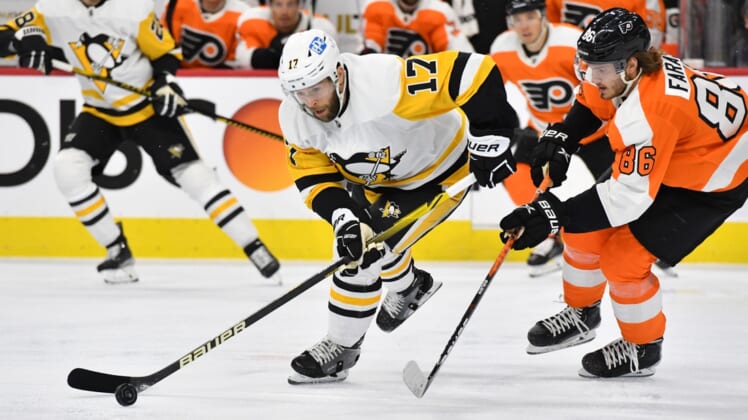 Evan Rodrigues added one goal and one assist and Brian Boyle also scored for the Penguins, who have won 10 in a row. Rust has scored eight goals in his last four games.

The Flyers were quite short-handed as key players Claude Giroux, Travis Konecny, Travis Sanheim and Ivan Provorov were in the league’s health and safety protocols. Sean Couturier and Ryan Ellis are also out with injuries.

The Penguins went ahead 1-0 when Rust scored on the power play from a bad angle at 12:21 of the first period.

The Flyers appeared to equalize soon after, but the goal by Scott Laughton at 14:13 was waved off by the officials.

The officials reviewed the play and counted the goal, which became Guentzel’s 17th of the season. Letang assisted on all three of those early goals.

The Flyers closed within 3-1 at 8:10 of the second when Atkinson took advantage of a Pittsburgh turnover and connected for his 14th score of the season.

Rust nearly recorded a hat trick as he whistled a shot off the crossbar in the waning seconds.

After Jarry denied the Flyers on a couple of early scoring chances in the third, the Penguins took advantage when Rodrigues scored at 8:50 for a 4-1 lead.