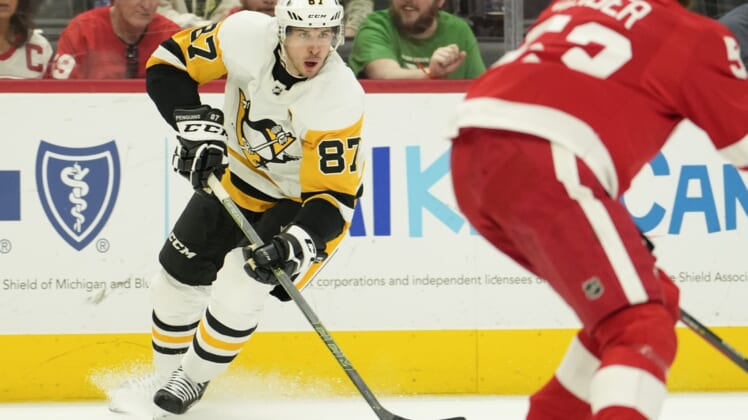 Kris Letang had a goal and two assists to lead the Pittsburgh Penguins to a 7-2 road win over the Detroit Red Wings on Saturday.

Evgeni Malkin scored two goals, Sidney Crosby and Rickard Rakell each had a goal and an assist for Pittsburgh (45-23-11, 101 points).

Pittsburgh opened the scoring with 6:16 remaining in the first on a goal by Chad Ruhwedel, who skated toward the Detroit goal, took a pass from Teddy Blueger in front of the crease and buried the chance to make it 1-0.

The Penguins then made it 2-0 with 4:42 left in the second when Crosby took a cross-ice pass from Rakell and shot the puck into the half-open net.

Detroit answered 1:18 later on a power play, cutting its deficit to 2-1 when Vrana took a pass from Tyler Bertuzzi and fired the puck into the net from the right faceoff circle.

The Red Wings tied the game at 2-2 just 17 seconds into the second period when Rasmussen skated in on a 2-on-1 and beat Pittsburgh goalie Casey DeSmith to the glove side.

But Pittsburgh took over after that, scoring five straight goals.

Rakell made it 3-2 with 12:16 left in the second when he skated in front of the Detroit goal from the left side and beat Detroit goalie Thomas Greiss above the glove.

Letang then gave Pittsburgh a 4-2 lead with 8:23 remaining in the second when he shot a puck from the left faceoff circle that fluttered underneath the crossbar and into the net.

With 3:37 remaining in the second, Pittsburgh took a 5-2 lead on a power-play goal by Malkin, who buried a loose puck that was laying in the crease into the goal.

Pittsburgh then went ahead 6-2 with 14:22 remaining in the game on a goal by Danton Heinen.

Malkin added his second of the game with 25.5 seconds remaining to round out the scoring.