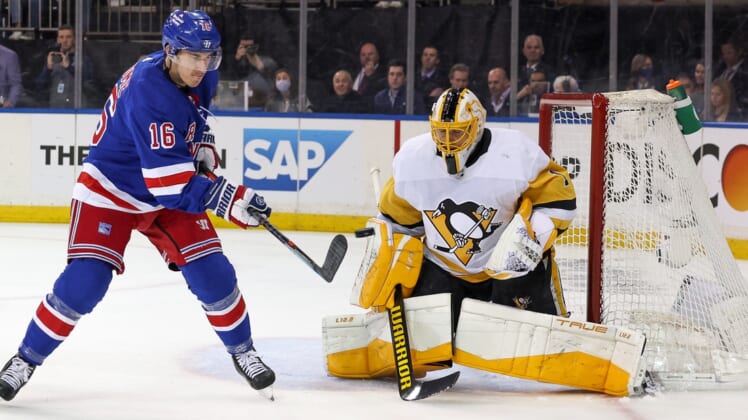 Evgeni Malkin scored 5:58 into the third overtime as the visiting Pittsburgh Penguins outlasted the New York Rangers 4-3 on Tuesday night in the opener of their first-round Eastern Conference playoff series.

In a game that had a combined 141 shots on goal, Malkin capped the four-hour, 38-minute marathon by scoring on a deflection.

The winning play started when Kasperi Kapanen pressured New York’s Filip Chytil into a turnover behind the net. Kapanen moved the puck from behind the net and found John Marino, whose wrist shot from the right point was tipped in over Igor Shesterkin’s left shoulder.

Malkin’s dramatic goal capped the 54th game in Stanley Cup Playoffs history to require at least three overtimes. It also was Pittsburgh’s first triple-overtime playoff game since Game 5 of the 2010 first round against the Ottawa Senators.

Malkin also assisted on Bryan Rust’s tying goal late in the second period on a 5-on-3. The game stayed tied after a goal by Chytil with 3:10 remaining was disallowed due to goaltender interference following a Pittsburgh challenge.

Pittsburgh third-string goalie Louis Domingue made 17 saves after entering the game with 10:42 remaining in the second overtime in relief of Casey DeSmith, who made 48 saves before limping off the ice.

Adam Fox and Andrew Copp scored in the opening 23-plus minutes for the Rangers, who held a 2-0 lead early in the second. Chris Kreider netted a short-handed goal that gave the Rangers a short-lived 3-2 lead late in the second.

Jake Guentzel converted two passes from Sidney Crosby during Pittsburgh’s 25-shot second period. Bryan Rust scored the tying goal during a 5-on-3 after getting the secondary assists on Guentzel’s tallies.

Shesterkin stopped 79 shots, the second-most in a playoff game. The NHL record for postseason saves was set by Joonas Korpisalo of the Columbus Blue Jackets, who made 85 saves in Game 1 of the first round in 2020 against Tampa Bay.

Fox opened the scoring with 10:41 remaining with a long wrist shot near, and Copp’s one-timer from the left circle made it 2-0 3:08 into the second.

The Penguins scored twice in a span of 7:15 when Crosby and Guentzel capitalized on poor defensive coverages. Guentzel easily scored on a deflection to make it 2-1 at 4:32 of the second and converted Crosby’s backhand pass with 8:13 left in the second.

Kreider scored on a backhander with 2:53 remaining, but Rust slid the puck into the vacated right side of the net after getting a cross-ice pass from Malkin.