Penguins look to get offense going vs. Knights 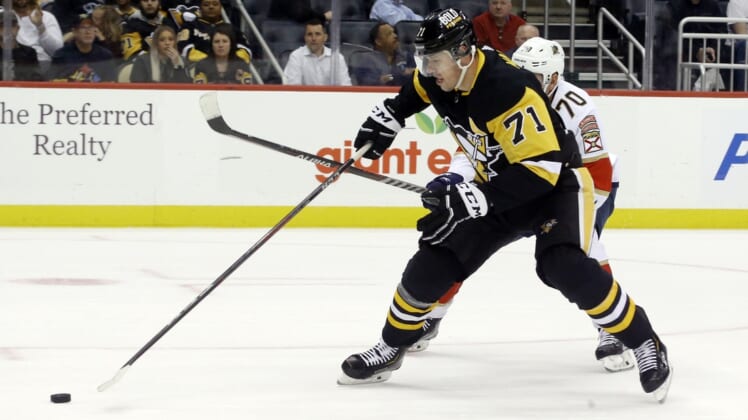 The Pittsburgh Penguins, who on Friday host the Vegas Golden Knights, have long been known for their firepower. But they have run into a scoring problem.

Not so much getting goals in general — the Penguins sit just outside the top 10 in the NHL with an average of 3.21 a game — but getting them from more than a handful of players.

The top line of Jake Guentzel, Sidney Crosby and Bryan Rust, along with second-line center Evgeni Malkin, is carrying the scoring load. It has been a problem intermittently, and now those four have accounted for 15 of Pittsburgh’s 19 goals over the past eight games.

“I don’t know the key there, but I think we’ve got to do a better job at rolling our lines and everybody putting in the work and following the systems,” Penguins winger Brock McGinn said. “When we do that, we can hem teams in the offensive zone and tie them in. That’s when we get our opportunities to go out there and score.”

The lack of scoring depth could lead to some changes. For Friday, that could mean Kasperi Kapanen — whose normal spot is alongside Malkin — getting scratched. He got benched late Tuesday in a 4-3 loss against Florida, and on Thursday at practice he was relegated to rotating in some on the Penguins’ fourth line.

“My approach to our players — and (Kapanen) is no different — is that we’re always trying to be forthright with them, just trying to get them honest feedback,” Pittsburgh coach Mike Sullivan said.

The Penguins and Golden Knights are both sitting pretty in terms of making the playoffs and are scrambling for positioning.

“It’s disappointing that we lost two of those three games,” Crosby said. “But at the same time, for chunks of those games, we did some really good things, too. We’re right there.”

Vegas, in contrast, is coming off successive losses to two of the league’s bottom-feeders, 2-1 at Philadelphia and 3-1 at Buffalo.

The loss Thursday at Buffalo marked the return of longtime Sabres center Jack Eichel, who had an arduous breakup with his original club. He had no points in the game.

The Golden Knights have just 17 goals over their past eight games.

“Sooner or later, you have to think the hockey gods are going to shine down on us and we’re going to end up getting an ugly (goal) and things are going to start to open up for us,” defenseman Nicolas Hague said.

Still, the Golden Knights were 0-for-4 with the man-advantage against the Sabres.

“The way our staff works, everybody contributes everywhere,” DeBoer said, downplaying the change. “Sometimes we switch voices and messaging at different points just to grab attention back, especially when you’re getting 60 games into a season.”

The Golden Knights will be without No. 1 goaltender Robin Lehner, who was sent home Thursday to have a lower-body injury evaluated. This is separate from the upper-body injury that plagued him earlier this season.