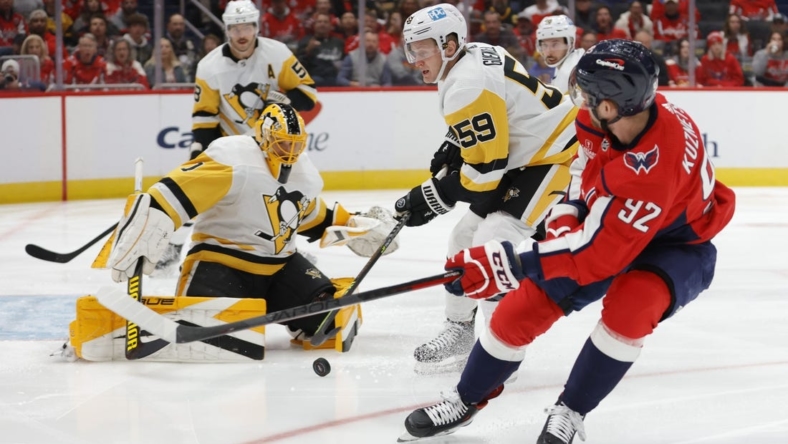 Casey DeSmith made 24 saves to help the visiting Pittsburgh Penguins snap a seven-game winless streak with a 4-1 victory over the Washington Capitals on Wednesday.

DeSmith’s victory was his first in five starts this season (1-3-1).

Jason Zucker, Brock McGinn and defenseman Jeff Petry each scored during a three-goal second period and Jake Guentzel tallied into an empty net in the third for the Penguins. Pittsburgh’s victory was its first since posting a 6-3 win over the Columbus Blue Jackets on Oct. 22.

Washington’s Marcus Johansson converted a centering feed from Sonny Milano scored with 7:38 remaining in the third period. Darcy Kuemper turned aside 24 shots for the Capitals, who have lost five of their last six games (1-3-2).

Pittsburgh opened the scoring at 7:43 of the second period.

Zucker skated out from behind the goal line and wired a sharp-angle shot from the corner that initially was denied by Kuemper. The netminder lost sight of the puck and inadvertently kicked it in while reacting toward Rickard Rakell closing in on goal. Zucker was credited with his third goal of the season and second in his last three games.

The Penguins doubled the advantage just over five minutes later despite defenseman Jan Rutta serving a cross-checking penalty on Ovechkin.

Jeff Carter kept the puck inside the blue line and immediately feathered a pass to McGinn, who wristed a shot that trickled past Kuemper. The goal was McGinn’s second of the season.

Pittsburgh scored on its next shot as Petry’s bid from just inside the blue line beat a screened Kuemper inside the right post. The goal with 4:55 remaining in the second period was Petry’s second of the season.