Penguins get dual hat tricks in win over Sharks 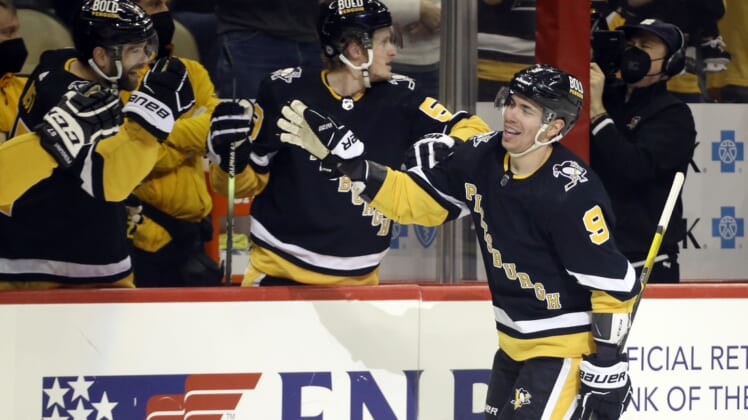 Evan Rodrigues and Bryan Rust each scored a hat trick Sunday and the Pittsburgh Penguins rode a six-goal first period to their eighth straight victory, 8-5 over the visiting San Jose Sharks.

Rust had a five-point game with two assists, while Jake Guentzel and Kasper Bjorkqvist also scored for the Penguins, who ended a two-week layoff.

Pittsburgh goaltender Casey DeSmith, playing in his first game since Dec. 11, made 22 saves.

San Jose goaltender James Reimer gave up six goals on 17 shots in the first period before Zach Sawchenko relieved him inat the start of the second, making his NHL debut. Sawchenko made 20 saves, allowing one third-period goal before the Penguins added an empty netter in the final minute.

Rodrigues got things started at 1:03 of the first, lifting the puck past Reimer from the slot.

At 3:12, Guentzel made it 2-0. In his return from a broken hand, he notched his team-leading 16th goal off a rebound.

Rust, also returning from an injury, swept the puck in from the right hash mark at 6:09 to make it 4-0.

At 15:33, Barbanov knocked down a shot and poked the puck past DeSmith’s right pad to reduce the deficit to 4-1.

In his NHL debut, Bjorkqvist scored from a scramble near the crease to boost Pittsburgh’s lead to 5-1 at 16:29.

Rust struck for his second goal, making it 6-1 with 27.2 seconds left in the first, on a shot that went off Barbanov.

At 14:27 of the second, the Sharks got one back on a power play when Burns scored on a blast from the center point.

San Jose got a quirky goal 20 seconds into the third, as Nieto’s shot off the end boards bounced in off DeSmith. And when Karlsson scored from the right point just 3:01 into the third, suddenly it was a one-goal game (6-5).

But with 2:01 remaining in the third period, Rodrigues added a power-play goal from the top of the right circle for his first career hat trick, and Rust scored an empty-netter with 10.4 seconds left.