Penguins aim to exact revenge in key encounter vs. Rangers 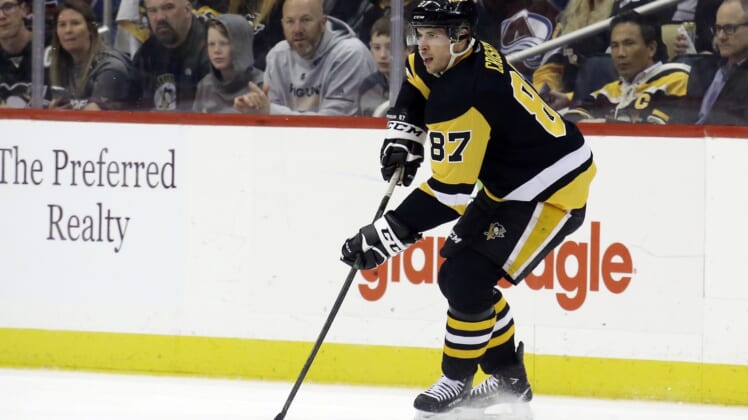 The Pittsburgh Penguins visit the New York Rangers on Thursday to conclude a stretch of three meetings in under two weeks between the Metropolitan Division rivals.

With only a few weeks left in the regular season, Thursday’s game could go a long way in determining which team receives home-ice advantage in that series.

Pittsburgh also has something to prove after dropping the two recent games against the Rangers – a 5-1 setback at Madison Square Garden on March 25 and a 3-2 loss four days later at home.

“Huge game for us,” Penguins forward Bryan Rust said of this matchup. “Obviously, that last one at MSG, we’d like to forget about, but I think it’s going to be in the back of our minds that we need to come out and play a lot better than that.

“We’ve got to establish ourselves and kind of show them who we are.”

Pittsburgh has lost five of its last seven games (2-4-1). That includes getting swept in a home-and-home series against the Colorado Avalanche, the top team in the NHL.

“We’ve played a lot of really good hockey, but when you’re playing good teams, there’s a very fine line between winning and losing,” Rust said. “Those little mistakes can add up.

“In order to be successful down the stretch and into the postseason, we need to clean that up and play consistently over 60 minutes.”

The Penguins feel they’ve been playing pretty well outside of that earlier game in New York.

“I think our team is competing extremely hard,” Pittsburgh coach Mike Sullivan said. “I love the fight in our game.

“We’re down to the sprint, so every game is big. Every game is important. We’re scratching and clawing and doing our best to put our best game on the ice to try to win games.”

New York dropped back-to-back games before bouncing back Tuesday with a 3-1 win against the New Jersey Devils.

Despite his recent success, Georgiev likely will give way to No. 1 netminder Igor Shesterkin on Thursday.

Shesterkin secured the wins in the two recent games against Pittsburgh, but overall he is just 4-4-1 with a 3.11 goals-against average and .886 save percentage since March 10.

The Rangers aren’t worried about aesthetics, however.

“At this time of year, you can draw it up any way you want — we’re looking for those two points to fight for home ice” in the postseason,” New York forward Ryan Strome said.

Artemi Panarin set up a pair of goals on Tuesday to give him a career-high 65 assists on the season. He has 22 points (four goals, 18 assists) in his past 14 games.