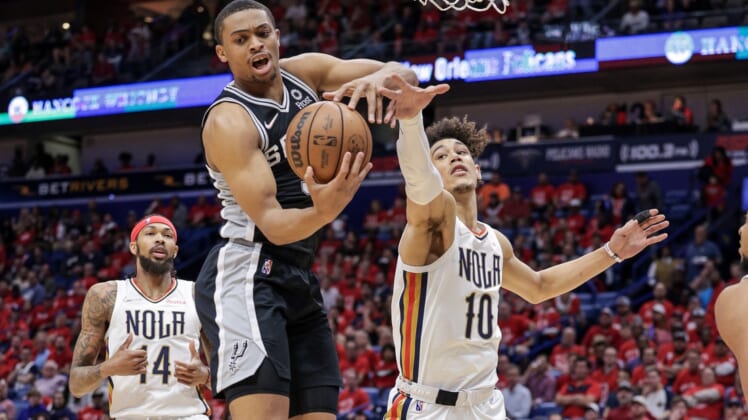 Jonas Valanciunas had 22 points and 14 rebounds and rookies Herbert Jones and Jose Alvarado added 12 each for the ninth-seeded Pelicans, who will visit the eighth-seeded Los Angeles Clippers in another elimination game Friday night.

The winner of that contest will earn the No. 8 spot in the Western Conference playoffs and a date with the Phoenix Suns in the first round.

Jones made two 3-pointers as New Orleans extended its 11-point halftime lead to 77-60 midway through the third quarter.

Vassell sank two free throws before Valanciunas made four consecutive Pelicans baskets to help them expand the edge to 85-64.

Johnson responded with three consecutive San Antonio baskets to help trim the deficit to 85-71, but New Orleans held a 92-75 lead at the end of the third quarter.

The Pelicans scored the first four points of the fourth quarter, but Johnson had six points to lead a 16-1 run that got San Antonio within 97-91 with 5:18 left.

Ingram, who missed the last three games of the regular season because of hamstring tightness, scored 11 points as the Pelicans took an 18-14 lead.

San Antonio tied the score twice before McCollum made two free throws and Jones beat the buzzer with a layup, giving New Orleans a 26-22 lead at the end of the first quarter.

Vassell made two of the Spurs’ four 3-pointers as the visitors closed within 47-46.

McCollum scored 10 during a 14-4 closing run that gave him 27 first-half points and New Orleans a 61-50 halftime lead.