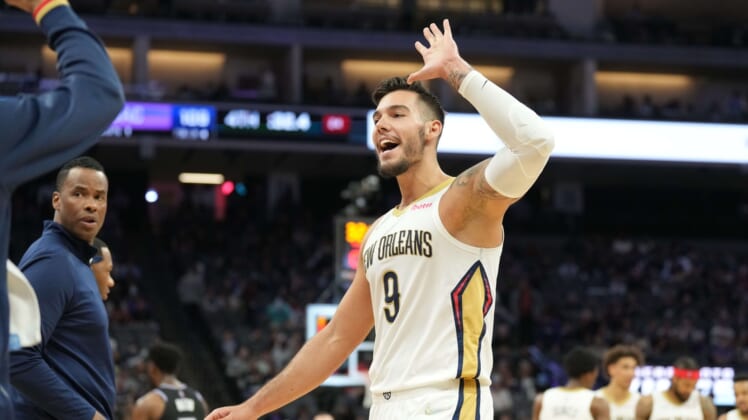 The New Orleans Pelicans have clinched a spot in the Western Conference play-in tournament, yet still have some work to do in order to get a play-in game at home.

The ninth-place Pelicans (35-44) host the Portland Trail Blazers (27-52) on Thursday night. New Orleans is trying to maintain or increase a one-game lead over the 10th-place San Antonio Spurs, who will be its play-in opponent.

The Pelicans, who began the season 1-12, clinched a play-in spot by defeating the Kings 123-109 on Tuesday night in Sacramento.

“No one wants to go through 1-12,” Pelicans coach Willie Green said. “But it’s made us tougher. It’s made us stronger. And more importantly, it’s made us more connected.

“It’s been a journey to get to this point. We know we still have work to do. We still have to celebrate these accomplishments. We’re all proud of the work they’ve put in to put ourselves in these positions.”

Jaxson Hayes, the No. 8 overall pick in the 2019 NBA Draft, led the Pelicans with a career-high 23 points to go along with 12 rebounds against the Kings. He made 10 of 14 shots from the floor.

“You could see the steps and the past two teams trying to start the foundation,” Hayes said. “You can’t build it overnight. It takes some time. I feel like this is the first year we have been all on the same page, everyone locked in together.”

The Trail Blazers have lost eight games in a row after squandering an 18-point lead in the fourth quarter of a 98-94 setback at Oklahoma City on Tuesday.

Portland was outscored 31-12 in the fourth quarter after making just two field goals in the final 10:05.

“We couldn’t make a shot,” Blazers coach Chauncey Billups said. “We started turning the ball over. And not only that, obviously we couldn’t get a stop. I played probably 10 different guys in that quarter just trying to find the rhythm and we just struggled.”

Portland has struggled ever since returning from the All-Star break, going 2-18. CJ McCollum was traded to the Pelicans and the team lost multiple players to injuries, including leading scorer Damian Lillard.

“Momentum is everything in this league and the second you let off the gas or become a little complacent, a team can take advantage of you,” Billups said. “And you have a lot of hungry guys out there on their team that are in a similar position as our guys. They don’t get to play that much. So, when they do, they want to take advantage of it and they were just hungrier than we were in the fourth quarter.”

The Pelicans have clinched the season series against the Blazers by winning the previous two meetings, including a 117-107 victory on March 30 in Portland.