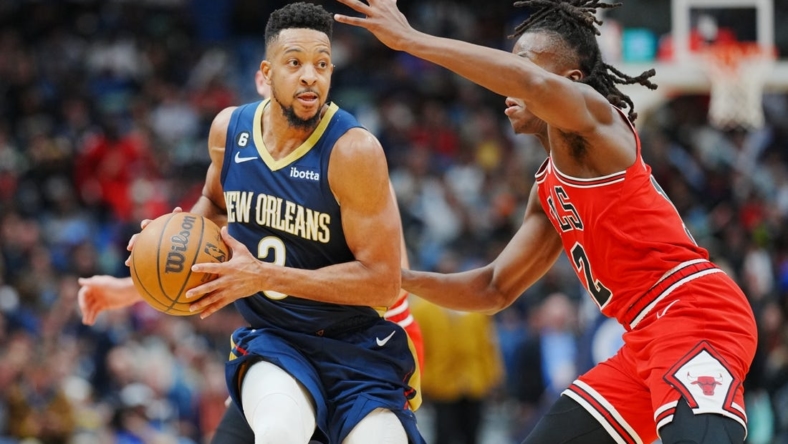 Ingram had a season-high nine assists to lead the way as the Pelicans finished with 30 assists on 43 baskets.

The Pelicans played their second consecutive game without leading scorer Zion Williamson, who’s day to day because of a bruised foot, and made 17 of 33 3-pointers (led by Murphy’s 5 of 6) one night after making a season-high 18 on 38 attempts in a 113-102 victory over Memphis.

DeMar DeRozan scored 28, Zach LaVine added 25, Nikola Vucevic had 14 and Alex Caruso 13 to lead the Bulls, who lost for the fifth time in six games.

The Pelicans started the third-quarter scoring with consecutive 3-pointers by Ingram, McCollum and Murphy to take a 67-53 lead.

DeRozan responded with consecutive baskets, but New Orleans expanded the lead to as many as 19 points before taking a 95-78 lead into the fourth quarter.

Valanciunas scored the first four points of the fourth quarter and Alvarado and Dyson Daniels each added a basket to give the Pelicans a 103-78 lead.

They led by eight points on two other occasions before consecutive layups by Andre Drummond and Goran Dragic cut the lead to 32-28 at the end of the quarter.

Caruso scored five points as the Bulls started the second quarter with a 9-0 run to take a five-point lead.

Jones had nine points, Murphy scored eight and Alvarado seven the rest of the period as New Orleans took a 58-53 halftime lead.