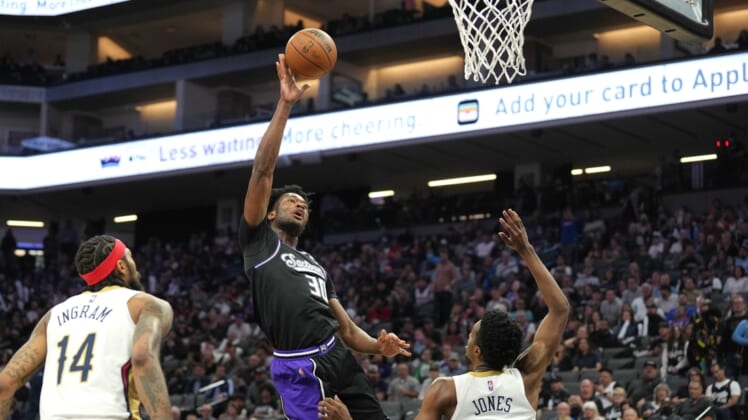 Hayes, with 12 rebounds, and Willy Hernangomez, with 12 points and 12 rebounds, put up double-doubles for the Pelicans (35-44) who remained one game ahead of the 10th-place San Antonio Spurs (34-45), who won at Denver.

Davion Mitchell had 15 points and 17 assists for the Kings (29-51), who were formally eliminated from the Western postseason race two nights earlier.

Immediately following a tight first half after which the Pelicans took a 60-57 advantage to the locker room, Brandon Ingram, Herbert Jones and Hayes nailed consecutive 3-pointers in a nine-point flurry that increased the margin to 12 in the second minute of the third period.

In losing for just the third time in their past seven games, the Kings got as close as four later in the third quarter and were down just 105-99 after a Chimezie Metu hoop with 7:23 remaining in the game.

However, McCollum hit two baskets in a 8-3 burst that broke the game open and allowed the visitors to coast home with a fourth triumph in the past five games.

Ingram finished with 17 points, seven rebounds and a team-high eight assists for New Orleans. Devonte’ Graham and Trey Murphy III chipped in with 14 apiece while Larry Nance Jr. had 10.

The Kings lost despite shooting 51.3 percent. En route to a team-high 22 points, Damian Jones was the most accurate of the hosts, shooting 8-for-10.

Jeremy Lamb matched Mitchell with 15 points for the Kings, while Metu and Harrison Barnes added 12 apiece.

Barnes pulled down six rebounds for Sacramento, which split the season series with the Pelicans 2-2.