Pelicans can clinch play-in berth when they visit Kings 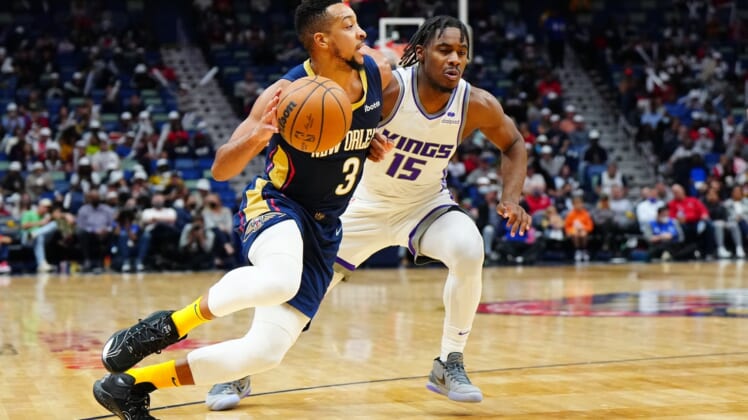 The New Orleans Pelicans can clinch a spot in the Western Conference play-in tournament when they visit the Sacramento Kings on Tuesday night.

The Pelicans (34-44), who can finish no higher than ninth in the Western standings, enter play Tuesday in ninth place, one game up on the San Antonio Spurs (33-45) and three ahead of the Los Angeles Lakers (31-47) with four to play.

A New Orleans win at Sacramento, or a Lakers loss at Phoenix, would assure the Pelicans would finish ahead of Los Angeles by virtue of a 3-0 season-series sweep. They’d also get a play-in spot ahead of the Lakers in a three-way tie due to a better record within the potential tie that would include the Spurs.

Equally important on Tuesday will be an opportunity to remain one game ahead of the Spurs in the battle for the ninth position. The No. 9 team will open the play-in tournament at home against No. 10 in an elimination game.

The Spurs hold the tiebreaker with the Pelicans by virtue of a 3-1 season-series win.

New Orleans could have created a nice cushion for itself with a road win over the Los Angeles Clippers on Sunday night, but saw a three-game winning streak come to an end in a 119-100 thumping.

Brandon Ingram, who had 15 points in the loss, didn’t think his team totally grasped the importance of the game, and hopes a lesson was learned.

“I’m happy this was tonight,” he said of a game the Pelicans could afford to lose and still remain ahead of the Spurs, “so we can have urgency in the next three or four games.”

New Orleans finishes with a home game Thursday against the Portland Trail Blazers, a visit to the Memphis Grizzlies on Saturday and a Sunday home game against the Golden State Warriors.

If the Pelicans fail to hold off the Spurs — or worse, fall completely out of the play-in tournament — they will have the Kings partly to blame. Sacramento has won two of the first three meetings, including 112-99 in New Orleans’ last visit on Nov. 3.

The clubs have met once since, with the Pelicans finally breaking into the win column with a 125-95 shellacking in New Orleans on March 2. Ingram had 33 points in the triumph.

That meeting was the first since each team made a major move at the trade deadline, with the Pelicans landing CJ McCollum from Portland, while the Kings acquired Domantas Sabonis from the Indiana Pacers.

McCollum contributed 17 points to last month’s win over the Kings, while Sabonis went for 15 points and 14 rebounds.

Sacramento’s new big man likely won’t play for the seventh consecutive contest because of a bruised knee, and he is expected to be joined on the sidelines once again by De’Aaron Fox, who could miss his ninth straight game due to a sore right hand. Fox has averaged 22.3 points against New Orleans this season.

Without Sabonis and Fox, the Kings (29-50) are coming off a 109-90 home loss to the Warriors on Sunday that formally eliminated Sacramento from play-in contention, extending its playoff drought to an NBA-record 16 straight seasons.

The Pelicans’ visit will be the Kings’ final home game of the season, and newcomer Donte DiVincenzo would like to see his team turn around and applaud those in attendance.

“Even though there’s that drought, the fans are absolutely incredible,” he observed. “Night in and night out, they come in, they’re cheering and they’re loud. We have to give them something to be loud for.”