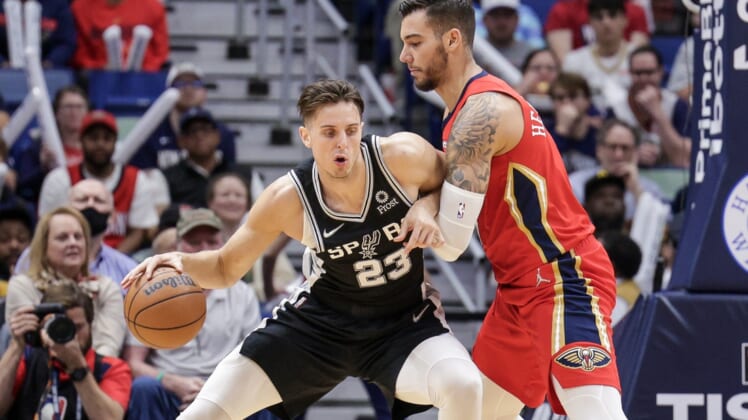 The Pelicans have held steady as a 5.5-point favorite at BetMGM and DraftKings. The Spurs have been backed by 61 percent of the spread-line bets and 64 percent of the money at the former and 59 and 58 percent, respectively, at the latter.

The winner will play a road elimination game Friday against the loser of Tuesday’s game between the No. 7 Minnesota Timberwolves and the No. 8 Los Angeles Clippers.

“It’s extremely valuable for all of us, for a young group, myself as a young coach,” Pelicans first-year coach Willie Green said of the franchise’s first postseason game in four years. “We stayed together and stayed connected. The guys have earned the right to have an extended season.”

The Pelicans (36-46) have not had forward Zion Williamson, their leading scorer a year ago, all season because of foot surgery. They lost 12 of their first 13 games, but have had a winning record since then and have played much better since acquiring guard CJ McCollum in a trade with Portland in early February.

“It shows you how they stuck together, how they continued to fight through adversity, how much growth the team has had,” McCollum said after practice Tuesday. “I’m happy I could help get us into this position where we have a chance to get some postseason experience.”

Second-leading scorer Brandon Ingram (22.7) has missed 27 games this season, including the last three due to hamstring tightness. But he practiced fully Tuesday and expects to play Wednesday.

“The word we used all year has been resilient,” Ingram said. “Those first 12 games don’t tell who we are now. We’ve made strides. We got better. We knew the goal in mind. We didn’t know if we were going to be able to reach it but we’re getting closer and closer and guys are hungry.”

The Spurs (34-48) were neck-and-neck with the Pelicans to host this game before losing their last three games.

San Antonio won both meetings with the Pelicans in New Orleans, most recently prevailing 107-103 on March 26.

“I can’t wait,” said forward Keldon Johnson, the team’s second-leading scorer (17.0). “I feel like it’s time for us to prove some stuff. I feel like everybody’s got that mindset, and we all know we can do it as long as we do it together.”

Guard Lonnie Walker IV, the Spurs’ top scorer off the bench, has been plagued by a sore back since colliding with New Orleans’ Willy Hernangomez during the Pelicans’ 124-91 victory in San Antonio on March 18.

Walker, who is averaging a career-best 12.1 points this season and 15.3 points since the All-Star break, scored a team-high 24 points against Golden State on Saturday before sitting out Sunday’s game at Dallas with home-court already decided.

“At this point, I don’t think I will fully recover for the rest of the season,” Walker said. “It’s just something I’m going to have to deal with and be durable about it.

“I’ve been through worse. There’s nothing that’s going to stop me from playing how I’m supposed to play. It’s all about getting to Wednesday and being ready as soon as that ball tips off.”