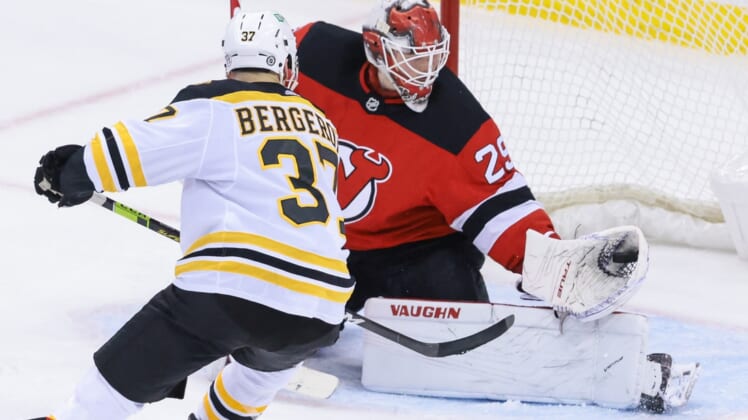 Pavel Zacha scored his second goal of the game with 2:18 left in overtime Tuesday night as the New Jersey Devils won their home finale by coming back from a pair of one-goal deficits to beat the Boston Bruins, 4-3, in Newark, N.J.

Zacha shuffled the puck as he bore in on the crease before flicking a backhand over Jaroslav Halak’s glove shoulder to give the Devils (18-28-7, 43 points) their fourth win in the last five games.

Jesper Boqvist and Yegor Sharangovich scored game-tying goals in the third for the Devils. Mackenzie Blackwood made 33 saves.

Patrice Bergeron, Taylor Hall and Sean Kuraly scored for the Bruins (31-14-7, 69 points), who had a four-game winning streak snapped and missed a chance to move closer to the second-place Washington Capitals and lengthen their lead over the fourth-place New York Islanders in the East Division. Boston is two points behind the idle Capitals (33-14-5, 71 points) and one point ahead of the Islanders (31-16-6, 68 points), who fell to the Buffalo Sabres, 4-3, in a shootout.

Zacha opened the scoring 8:42 into the first before Bergeron tied the score at 4:36 of the second. Hall accidentally put the Bruins ahead a little less than 10 minutes later, when Matt Grzelcyk’s shot glanced off Hall as he leaped in front of Blackwood and fluttered into the net with 5:58 remaining. The goal was upheld after a goalie interference challenge by the Devils.

The teams traded goals in a span of 3:31 just before and after the midway point of the third. A shot by Damon Severson ticked off the skate of Charlie McAvoy and to Boqvist, who tucked the shot over Halak’s right pad with 10:50 left.

The Bruins retook the lead with 9:18 remaining, when David Pastrnak’s pass into the crease glanced off the stick of Kuraly as Severson tried closing in. But the Devils tied the game 1:59 later when a streaking Sharangovich took a pass from Severson and beat Halak on the breakaway.