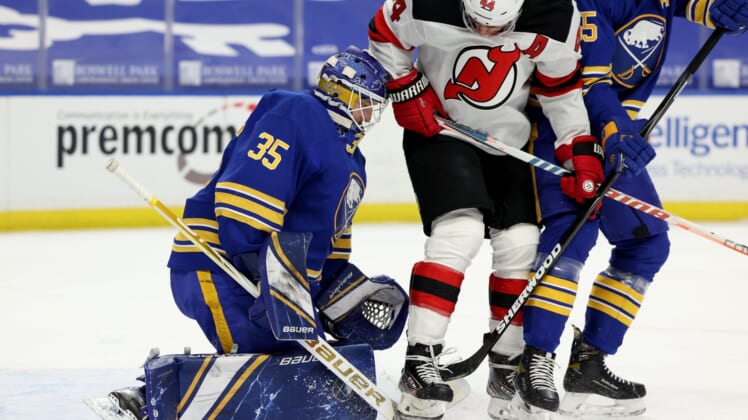 Off a rebound of Linus Ullmark’s save on Michael McLeod’s wraparound attempt, Boqvist pounced on the puck and put it in for his first goal of the season, breaking a 3-3 tie at 8:45 of the third.

Jack Hughes, Yegor Sharangovich and Janne Kuokkanen each had a goal with two assists. Aaron Dell made 24 saves to win for the first time in three starts for the Devils, who ended their 0-2-2 slide while playing one day after dealing veterans Kyle Palmieri and Travis Zajac to the New York Islanders.

Victor Olofsson, Tage Thompson and Jeff Skinner each scored for Buffalo, which saw its 3-0-1 stretch come to an end. Ullmark stopped 32 shots as his three-game winning streak also ended.

The Sabres scored just 53 seconds into the game. Taking a corner pass from Henri Jokiharju, Olofsson chipped the puck by Dell from the slot.

However, the Devils leveled the contest a little more than one minute later. On the power play, Zacha worked his way from in front of the net to knot the score at 2:06.

Zacha came through again with the man-advantage, this time on a wrister from the top of the near circle to give New Jersey a 2-1 lead just 3:46 into the contest.

The Devils entered the game converting 13 percent (14-of-108) of their power-play chances, but scored twice with the man-advantage for the first time this season.

The Devils made it 3-1 on Hughes’ second-effort goal from the slot with 3:56 left in the opening period.

Buffalo got within a goal with 8:04 left in the second, when Thompson was at the right place and time on the power play. The Sabres tied it at 3-3 through Skinner with 1:39 left in the middle frame.

Buffalo’s Taylor Hall, subject of trade rumors prior to Monday’s league deadline, was a healthy scratch for a second consecutive contest.