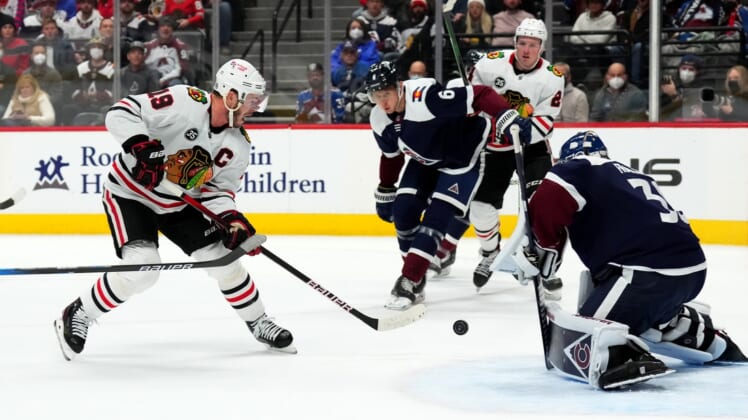 Pavel Francouz had 24 saves for his second shutout in as many starts, and the Colorado Avalanche beat the Chicago Blackhawks 2-0 in Denver on Monday night.

Mikko Rantanen and Nazem Kadri scored goals for the Avalanche, who have won 16 in a row at home and seven straight overall.

Colorado tied Boston for the fifth-longest home winning streak in league history. It is also the longest streak since Detroit won 23 straight from Nov. 5, 2011-Feb. 19, 2012.

Marc-Andre Fleury had 27 saves for the Blackhawks, who have lost all three games to Colorado this season with one more left between the teams.

Francouz had one shutout coming into this season but has doubled that total in less than a week. The Avalanche, the NHL’s second-highest scoring team, have allowed just three goals in the last four games.

After a scoreless first period, Colorado got the first goal more than halfway through the second. With Chicago defenseman Seth Jones off for interference, the Avalanche worked the puck around on the power play.

It came to Makar at the point, and he sent it to Nathan MacKinnon at the top of the left circle. MacKinnon tipped it over to Kadri, whose one-timer grazed Calvin de Haan’s stick, trickled through Fleury’s pads and just over the line at 11:24.

It was Kadri’s 16th goal and team-leading 52nd point.

The Blackhawks carried the play for the first four minutes of the third period and nearly tied it on a couple of opportunities but Colorado got the next goal.

Gabriel Landeskog got the puck off the side boards near the left circle and slid a pass to Rantanen in front of the net. Rantanen held the puck until Fleury committed low and then roofed a backhand at 6:41. It was his 22nd goal of the season.

Fleury came off for an extra skater with 3:36 left but Chicago managed just one shot on goal the rest of the way.