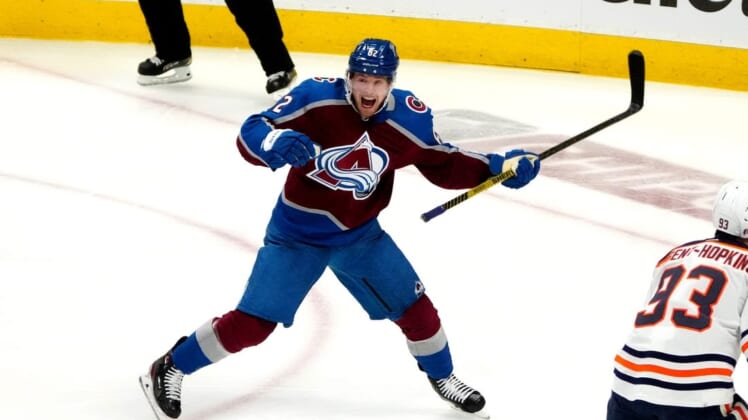 Artturi Lehkonen and Josh Manson scored 15 seconds apart in the second period, Mikko Rantanen had a goal and an assist, and the Colorado Avalanche beat the Edmonton Oilers 4-0 in Game 2 of the Western Conference finals on Thursday in Denver.

Mike Smith made 36 saves for the Oilers.

Game 3 is Saturday night in Edmonton.

The first period was fast-paced and featured several chances by both teams, but the goaltenders kept it scoreless after 20 minutes.

The Avalanche changed things in the second.

A turnover by the Oilers in their own zone gave Colorado an opportunity. Rantanen got the puck off the boards and backhanded a pass to Kadri, who unleashed a slapshot from the top of the left circle. Lehkonen deflected it past Smith at 3:58 to open the scoring.

It was his fifth goal of the postseason.

The Avalanche struck again off the ensuing faceoff at center ice. The puck went into the Edmonton zone to Kadri, who sent a diagonal pass to Manson at the point. His slapshot beat Smith on the short side at 4:13 for his second of the playoffs.

Less than two minutes later, Colorado added to its lead. Rantanen chipped the puck out of his own end to Kadri, and the two broke out on a two-on-one. Kadri fed Rantanen as the pair skated in on Smith, and Rantanen roofed a shot at 6:02 for his third goal of the postseason.

Edmonton had chances to cut into the deficit in the second period. The best opportunity occurred when Darnell Nurse came in alone in the Avalanche zone, but Francouz made the save on a close-in shot.

The Oilers continued to press in the third period to break through, but Evander Kane’s elbowing penalty on Cale Makar late in the frame led to MacKinnon’s power-play goal at 15:20. It was MacKinnon’s 10th goal of the postseason.