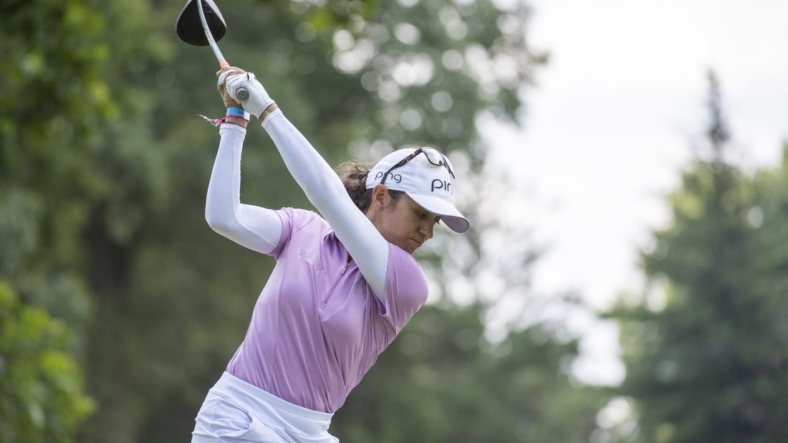 Paula Reto of South Africa set a course record with a bogey-free, 9-under-par 62 to take a two-shot lead at the CP Women’s Open on Thursday at Ottawa Hunt and Golf Club in Ontario.

Reto started her round on the back nine and racked up six of her nine birdies there for a 29 at the turn. She leads South Korea’s Narin An (7-under 64) by two.

“I played (the) back nine twice for practice, and I just … like the approach shots and the tee shots on that nine, which fits my eye pretty well,” Reto said. “Then I hit a couple close shots, which made it easy. Then when a few putts went in you kind of get comfortable and sort of one shot at a time after that. It does make a difference.”

Reto tapped in her ninth and final birdie at her final hole, the par-5 ninth, to set the new low mark. The previous course record was held by Canadian fan favorite and two-time major winner Brooke Henderson.

“I didn’t know it was the course record, so kind of finding out after my round takes the pressure off,” Reto said of bettering Henderson’s 63 in 2017. “So I’m happy about it. You know, I’m hoping to do some more good rounds coming here.”

An also played bogey-free golf with seven birdies, including at three of the five par-3 holes.

Emma Talley, Lilia Vu and Robynn Ree were tied for third at 6-under 65. Talley opened with nine pars before doing all her damage on the back nine — four birdies and one hole-in-one.

At the par-3 13th hole, Talley knocked her tee shot right at the pin and watched as it took two short hops before rolling in.

“It was so cool,” Talley said. “I’m getting chills as we speak, because (playing partner Elizabeth Szokol) hit first, and I’m pretty sure hers lipped out, and then I hit mine in the hole.

Szokol shot a 5-under 66 and was part of a large tie for sixth that also included world No. 6 Atthaya Thitikul of Thailand, world No. 9 Nasa Hataoka of Japan and 19-year-old Lucy Li. A former child phenom who qualified for the U.S. Women’s Open at 11 years old, Li is playing on a sponsor’s exemption after earning her LPGA Tour card for 2023.

The low Canadians through one round were Alena Sharp and Maddie Szeryk at 4-under 67. Henderson, who won the event in 2018, shot a 2-under 69.

Danielle Kang returned from an 11-week absence due to a tumor on her spine to shoot 67.

“Story of my day was put the work in,” Kang said. “I know that people around me have helped me get here, to stand here in front of you guys today to perform and play. I just feel good. I felt great that I was able to compete. I wasn’t really worried about anything else.”