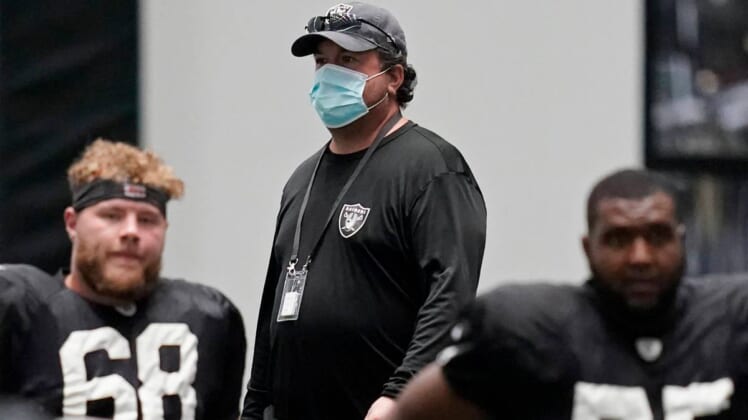 The key stat for the Las Vegas Raiders after Week 1 of the NFL was a 1-0 record. But concerns over a lack of pass rush aren’t lost on defensive coordinator Paul Guenther who knows it must get better in Week 2 vs. the Saints.

Paul Guenther is under no false pretense when it comes to the importance of his defenses front line.

The Raiders upgraded the interior of the defensive front with free agent Maliek Collins and bolstered their roster at the EDGE with the signing of Carl Nassib. Add in second-year phenom Maxx Crosby, and the refocused Arden Key, and there were expectations this group would get a lot better.

The first test of that new defensive front was against a crafty veteran in Teddy Bridgewater in Carolina last week. Bridgewater effectively neutralized the Raiders pass rush by keeping them off kilter with creative and ever-changing snap counts. The Raiders mustered just one sack and three quarterback pressures.

“It just wasn’t good enough,” Paul Guenther said of the Raiders lack of a pass rush against the Panthers. “Not what I anticipated, not what I saw on the practice field. So, that was a big point of emphasis this week for us to get that back on track.”

It had to be a point of emphasis as Las Vegas hosts one of the best to ever play the position in Drew Brees and the offensively stacked Saints on Monday Night Football.

“Week 2, big challenge for us,” Guenther said. “They’re a very good offense. They’ve been together a long time running the same system, so it’ll be a good challenge for us and hopefully, we’re up top the challenge.”

In Week 1, the much-ballyhooed Collins was nowhere to be found. Although a review of the game film shows Collins having a solid game up front, the entire interior of the defensive line was slow to get off. That led to very little pressure on Bridgewater who can get rid of the ball quickly. A trait Brees is known for as well.

Raiders defensive end Maxx Crosby knows he and his teammates are faced with a big challenge and that they have to play better than they did in Week 1.

“Up front, we know we have to be better,” Crosby said this week. “Personally, I know I didn’t play to the level I want to play. We got to disrupt him (Brees). We can’t let him sit back there and get comfortable. We need to be in his face the whole game.”

How big of a challenge will it be for the Raiders defensive line against Brees and the Saints?

“It’s going to be the greatest challenge there is,” head coach Jon Gruden said. “This guy is the best. But he’s not the only problem. They went 5-0 without Brees. They got Taysom Hill and [Alvin] Kamara and they got [Latavius] Murray and they got Jared Cook. We got to stop their offense and slow down their defense, but it will be a big challenge for us.”

In addition to Brees’ ability to pick apart a defense, the Raiders will also have to contend with another bruising tailback in Alvin Kamara. Paul Guenther’s defense was able to keep the Panthers Christian McCaffery in check for the first half of last week’s game, but McCaffery came on strong in the second finishing the day with two touchdowns and 93 yards rushing.

What did Guenther and his defense learn from McCaffery that can be used to thwart Kamara on Monday?

“He (Kamara) can go out in the flank and run routes,” Guenther said. “They use him on the jet sweeps and those kinds of things. And obviously, he’s a dangerous guy in the backfield when he gets the ball. They use him very similar to how they use McCaffrey, so we’ll be ready for him wherever he’s at.”

The Las Vegas Raiders, and Paul Guenther and his defense, are currently +6 against the New Orleans Saints with an over/under of 49, according to the latest line by William Hill.