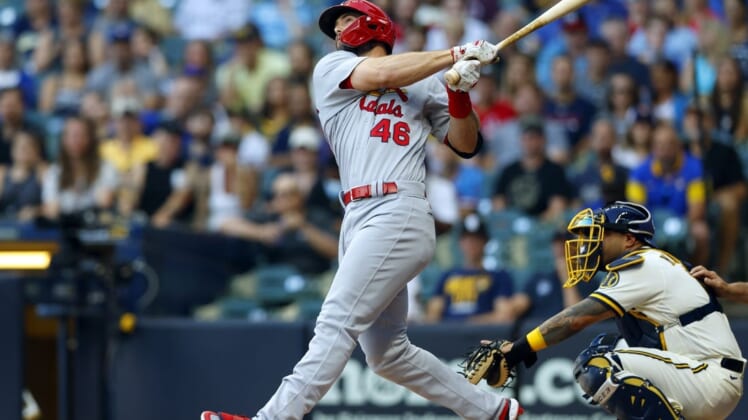 Paul Goldschmidt and Nolen Arenado each hit a two-run homer to pace visiting St. Louis to a 5-4 victory over Milwaukee on Wednesday night, moving the Cardinals a game ahead of the Brewers in the NL Central.

Johan Oviedo (1-1) picked up the victory with 2 1/3 perfect innings in relief of starter Adam Wainwright, who allowed four runs on seven hits in 4 2/3 innings. Genesis Cabrera finished with two scoreless innings for his first save.

The Brewers put two aboard in the ninth when pinch-hitter Victor Caratini walked with two outs and Tyrone Taylor was hit by a pitch, but Christian Yelich grounded to second.

Eric Lauer (6-3) allowed five runs on six hits in six innings, striking out five and walking one. Lauer has given up eight homers in his last three starts.

Arenado put the Cards up 5-4 with a two-run homer in the sixth. Goldschmidt walked with one out and Arenado followed with his 14th homer, sending a 2-1 pitch 406 feet to left-center.

Milwaukee went in front 4-3 with two runs in the fifth when Tyrone Taylor singled and Yelich followed with an RBI double. Andrew McCutcheon scored Yelich with a ground-rule double into the left-field corner, chasing Wainwright.

Goldschmidt staked the Cardinals to a 2-0 lead in the first, following a one-out single by Dylan Carlson with his 17th homer.

The Brewers got one back in the bottom half on a two-out solo homer by Rowdy Tellez, his 11th.

St. Louis pushed the lead to 3-1 in the fourth when Arenado doubled with one out, Juan Yepez singled and Albert Pujols lined a sacrifice fly to left.

Milwaukee answered again in the bottom half on McCutchen’s fifth homer, a one-out solo shot to left-center.

The victory was the second straight for St. Louis, which won 6-2 on Tuesday after dropping the opener of the four-game series, 2-0. The Cardinals now lead the season series 6-5.