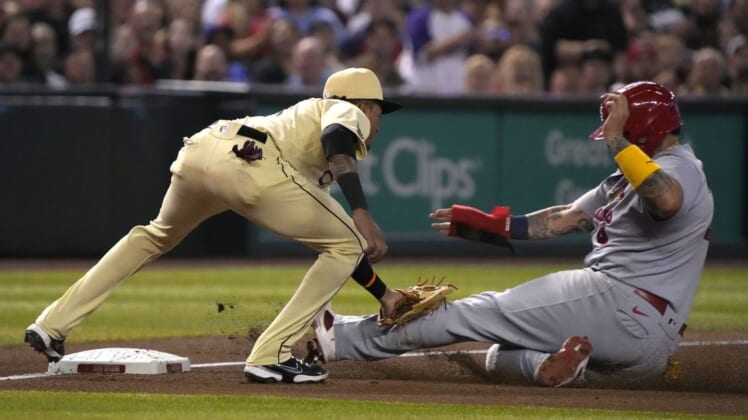 Paul Goldschmidt homered and drove in two runs, Nolan Arenado went 4-for-5 with a two-run double and Miles Mikolas pitched eight strong innings as the St. Louis Cardinals notched a 5-1 victory over the Arizona Diamondbacks on Friday night at Phoenix.

Goldschmidt’s solo homer was his fifth blast in 17 games against his former team and also was his 30th of the season, marking the seventh time he has reached that milestone. Goldschmidt reached base four times on three hits and a walk and also scored twice.

Arenado had three doubles, the biggest one driving in two during a four-run seventh, as the Cardinals won for the fifth straight game and 16th in the past 20.

Mikolas (10-9) gave up one run and two hits. He struck out four and walked one.

Yadier Molina of the Cardinals had his first three-hit game of the season to move into fifth place among primary catchers with 2,152 career hits. Molina passed New York Yankees legend Yogi Berra (2,150).

Josh Rojas had two hits for Arizona, which lost for just the fifth time in the past 13 games.

Goldschmidt opened the scoring with two out in the first inning with a 416-foot blast to left off a full-count fastball from Arizona’s Tommy Henry (2-2).

There was no more scoring until the Cardinals put together four runs and four hits in the seventh.

The bases were loaded with two outs when Goldschmidt sent a one-hopper toward the mound that caromed off the leg of Diamondbacks reliever Kevin Ginkel. Molina scored from third and Goldschmidt reached safely without a throw.

Arenado followed with a double to left-center to make it 4-0. Edwin Uceta replaced Ginkel, and catcher Carson Kelly was crossed up by the first pitch for a passed ball and Goldschmidt scored from third to make it a five-run margin.

Mikolas retired the first 11 batters he faced until Rojas doubled into the left-field corner with two out in the fourth. He didn’t give up another hit until Sergio Alcantara began the eighth by ripping a double that short-hopped the fence in right.

Alcantara moved to third on Kelly’s foul out to right and scored on Geraldo Perdomo’s infield out.

Dylan Carlson also had two hits as St. Louis had a 12-4 edge.

Henry gave up one run and six hits over 5 1/3 innings. He struck out seven and walked one.