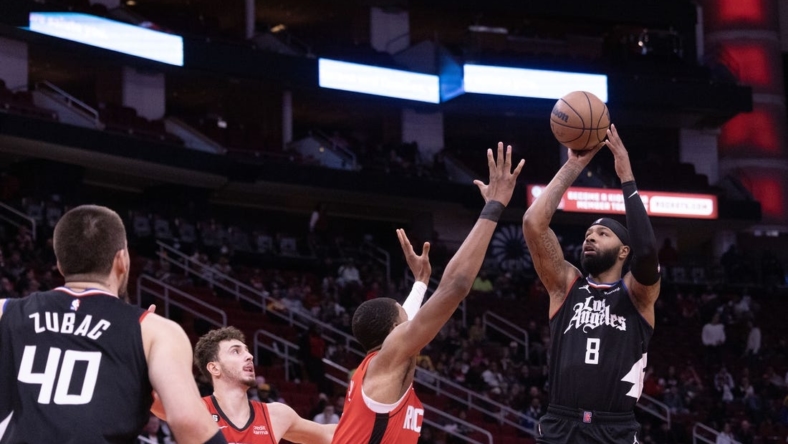 Paul George scored a team-high 22 points, Reggie Jackson added 17 points and the visiting Los Angeles Clippers cruised to a 122-106 victory over the Houston Rockets on Monday.

George routinely delivered timely baskets to help the Clippers maintain a comfortable margin. He tallied just three points in the opening quarter, missing all five of his shots, but totaled 19 points over the middle two periods as the Clippers moved to 3-0 against Houston this season.

The Rockets, having played 10 of their first 13 games on the road, dropped their return home following a four-game roadie. Including Monday, the Rockets will play 13 of 19 games at home.

Jackson was an able second fiddle, shooting 7 for 11 overall and 3 for 7 from behind the arc while adding six assists to his ledger. George grabbed eight rebounds, dished out five assists and had two steals. Marcus Morris Sr. scored 15 points on 6-for-9 shooting for the Clippers, who shot 50.6 percent overall and received 51 points from their bench.

Jalen Green paced the Rockets with 25 points and seven assists and added six rebounds. Kevin Porter Jr. chipped in 20 points and seven rebounds but missed 12 of 18 shots and made just 8 of 15 from the free-throw line. Houston shot 9 of 30 on 3-pointers and 61.3 percent from the line.

Green and Alperen Sengun were sharp early for the Rockets, combining for 12 points on 6-of-11 shooting in the opening period. But the Clippers seized the lead with a 10-2 run keyed by two Luke Kennard 3-pointers off Houston turnovers, the second giving the Clippers a 24-17 lead.

When the Clippers opened the second period with an 8-0 spurt, they pushed their lead to 39-23, the largest of the first half. The Rockets clawed back to within seven on a Sengun free throw but George answered with five quick points to help the Clippers reclaim control before the break.

The Rockets were undone by their lackadaisical ball security and poor shooting in the first half. The Clippers turned 11 Houston turnovers into 16 points before the break while the Rockets missed 10 of 13 3-pointers. When reserves Norman Powell (17 points) and Terance Mann (14 points) scored in succession with just under eight minutes left in the game, the Clippers extended to a 108-87 lead.