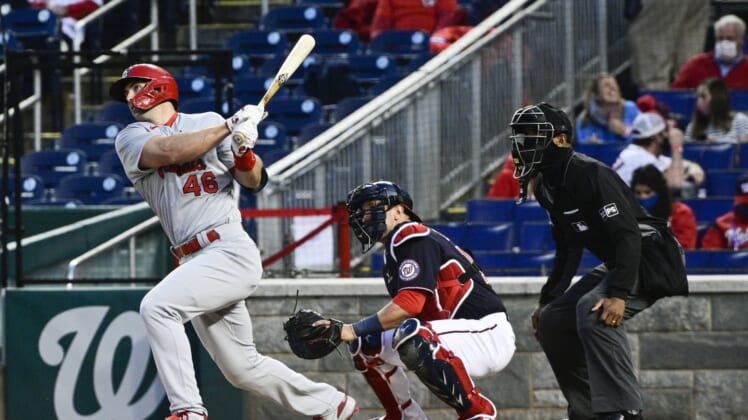 Paul DeJong hit a grand slam and a solo homer, and the visiting St. Louis Cardinals beat the Washington Nationals 12-5 on Monday.

Tommy Edman, Paul Goldschmidt and Justin Williams also homered for the Cardinals, who were shut out 2-0 in Philadelphia on Sunday.

Ross gave up his first run of the season when DeJong homered to left with one out in the second.

The Cardinals added three runs in the third.

Justin Williams led off with a single and was sacrificed to second. Edman swung on a 3-0 count and homered to center to make it 3-0. Goldschmidt followed with a homer to left center.

The leadoff batter in fourth, Dylan Carlson, was hit by a pitch and DeJong walked. Goldschmidt singled to center, scoring Carlson. DeJong went to third, but Goldschmidt was thrown out at second. After Williams walked, Flaherty executed a safety squeeze with two strikes and DeJong scored to make it 6-0.

In the Washington fourth, Juan Soto walked and Josh Bell doubled. After Kyle Schwarber struck out, Soto scored on a wild pitch and Bell moved to third. Josh Harrison walked and Starlin Castro hit a fly to right, scoring Bell.

The Cardinals broke it open in the fifth. With the bases loaded and one out, DeJong sent an 0-1 Ross pitch to left for a grand slam, making it 10-2. With two outs, Williams homered to center off Kyle Finnegan.

Washington plated three in the sixth on a fielder’s choice by Starlin Castro, an RBI-double by Yan Gomes and an RBI-single by Victor Robles; and the Cardinals added a run in the eighth on Goldschmidt’s single to make it 12-5.