Pats look to shake off struggles in Miami vs. Dolphins 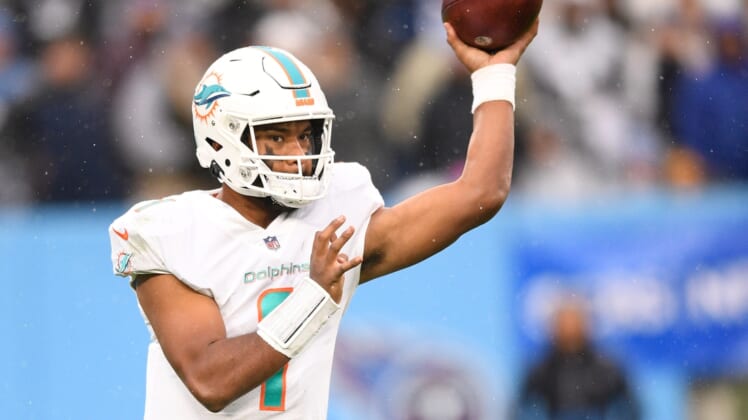 The New England Patriots, who have a chance to win their 18th division title since 2001 on Sunday, haven’t had a lot of success in Miami — site of their regular-season finale.

Under coach Bill Belichick, New England (10-6) is just 2-7 when visiting the Dolphins (8-8) in December and January.

“I know one thing,” said Devin McCourty, New England’s long-time safety and team captain, “It’s hard to go from (the cold weather in Boston) to 80 degrees (in Miami). It’s always a shock in pregame.”

The Dolphins were eliminated from playoff contention with last Sunday’s loss to the Tennessee Titans.

This is the fifth straight season that the Dolphins have failed to reach the playoffs. Miami hasn’t won a playoff game since 2000.

Miami has little to play for on Sunday, although wide receiver Jaylen Waddle (99 catches) needs just three receptions to break the NFL receptions record for rookies. The record of 101 catches was set by Anquan Boldin in 2003.

That type of consistency is something Waddle’s quarterback, Tua Tagovailoa, is still looking for.

The fifth overall pick in the 2020 NFL Draft, Tagovailoa has a solid 12-8 record in his 20 starts in the league. He hasn’t had a ton of success throwing deep, but he is completing 67.8 percent of his passes this season. That ranks him seventh in the NFL and third in the AFC.

However, in last week’s 34-3 loss at the Tennessee Titans, Tagovailoa completed just 18 of 38 passes for no touchdowns and one interception.

Had Miami beaten the Titans and then the Patriots this Sunday, the Dolphins would have made the playoffs regardless of other scores.

Instead, Tagovailoa’s performance left open the question of whether the Dolphins will look to acquire a more experienced quarterback in the offseason.

“I’ve heard this the entire time I’ve been here (in Miami),” Tagovailoa said of the trade rumors.

So while Sunday’s game no longer carries any playoff implications for the Dolphins, it will give Miami one last chance this season to see if Tagovailoa can make more progress as a game-changer.

New England has its own young quarterback in Mac Jones, who has started all 16 of New England’s games this season and completed 67.6 percent of his passes for 21 touchdowns and 12 interceptions. He has averaged 221 passing yards per game.

By comparison, Tagovailoa has 15 TD passes, 10 interceptions and an average of 212 passing yards per game.

Jones and Tagovailoa both played for the Alabama Crimson Tide, adding intrigue to their QB matchup.

In this season’s opener, Tagovailoa and the Dolphins beat Jones and the Patriots 17-16.

Now comes the rematch, with the Dolphins looking to sweep their annual two-game season series with the Patriots for the first time since 2000.

Harris and Waddle — like Jones and Tagovailoa — played college football at Alabama.