Patriots vs. Raiders: 4 Things to Watch 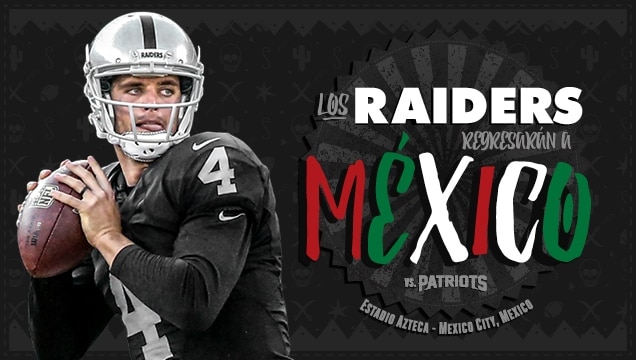 Sure, it’s technically a home game but the Raiders host the hot Patriots in another international game in Mexico City – if only it was in Oakland.

The Raiders play at “home” in Mexico City against the surging Patriots. Photo: Raiders

It’s that time of the year when teams in the NFL either assert their playoff readiness or fall back in the back and start plotting their draft strategy for 2018. Which group do the Oakland Raiders belong to? This week may very well tell us everything we need to know. Coming off a much-needed bye week, the Raiders get their stiffest test yet in a high-powered New England Patriots that certainly has its weaknesses including the league’s worst defense.

Here are four things to watch in today’s game in Mexico City:

No matter which way you look at this game, it’s not going to be easy. As we said on our Las Vegas Raiders Report Podcast this week, this game will most likely come down to who has the last possession. If the Raiders can put the game in Carr’s hands late, Oakland could make even more noise in the solidifying playoff picture. If Brady has the ball last, it more than likely will once and for all kill the Raiders playoff aspirations for what has been an odd 2017 season.

BONUS: Thanks to NFL Films, here’s a look at the history between the Raiders and Patriots.