The New England Patriots, who have put their early-season woes behind them, aim to record their fifth consecutive victory when they visit the Atlanta Falcons on Thursday night.

The Patriots (6-4) have outscored their foes 150-50 during the four-game streak and sit just a half-game behind the Buffalo Bills in the AFC East.

Patriots vs Falcons: Can Atlanta handle the Mac Attack?

Part of the reason for New England’s success revolves around the quick rise of rookie quarterback Mac Jones.

The No. 15 overall pick in the 2021 draft is showing maturity beyond his years as well as a pinpoint throwing arm. Jones has completed 69 percent of his passes for 2,333 yards, 13 touchdowns and seven interceptions.

Jones passed for a career-best three touchdowns and completed 19 of 23 throws for 198 yards on Sunday as New England steamrolled the Cleveland Browns 45-7.

“We’re confident and we know what the formula is for winning the game,” Jones told WEEI. “We just have to continue to do that. We can’t be satisfied with where we’re at. We’re not where we want to be and we’re going to continue to work every day, and this week is a quick week. We’ve got to be ready to go for the game Thursday.”

Patriots vs Falcons: Atlanta moving on quickly from 43-3 loss

Perhaps the bigger question is whether Atlanta (4-5) will be ready to go.

The Falcons are back on the field just four days after they were routed 43-3 by the Dallas Cowboys.

The beating was so one-sided that Atlanta trailed 36-3 at halftime, the 33-point deficit representing the franchise’s largest at the break since trailing the Johnny Unitas-led Baltimore Colts 35-0 on Nov. 12, 1967.

“It’s a good thing we play Thursday,” Falcons coach Arthur Smith said. “When you play a game like that, you wanna move on as quick as possible, so I’m kinda glad we’re playing Thursday.”

Quarterback Matt Ryan was one of many Atlanta players who had a subpar outing. He completed a season-worst 42.9 percent of his passes (9 of 21) for a season-low 117 yards while getting picked off twice. He posted a career-worst 21.4 passer rating.

“We didn’t play well anywhere,” Ryan said. “It’s not about any one position. Across the board, we all didn’t take care of our business, and we can do better than that, and we need to.”

The Falcons had won three of four games prior to the dismantling in Dallas. They could use a win to bolster their playoff hopes.

One hindrance could be the health of offensive do-it-all Cordarrelle Patterson. He was limited in Tuesday’s practice due to an ankle injury, and his status might not be known until close to kickoff.

Patterson leads the Falcons with seven touchdowns (five receiving, two rushing) and has a team-high 303 rushing yards. He also ranks second in both receptions (39) and receiving yardage (473). 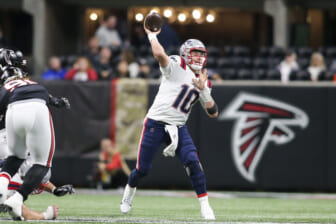 New England held Cleveland to 217 total yards and racked up five sacks last week. However, its biggest issue might not be the Falcons, but instead the short week.

Coach Bill Belichick is a master at preparation and isn’t big on taking shortcuts. But there isn’t time to do everything the Belichick Way when the schedule calls for a Thursday night game.

“From a coaching standpoint, you need to make good decisions. You need to make them quickly,” Belichick said. “If you give the team a poor game plan or poor direction, then it’s really hard for them to overcome that. There’s pressure on both coaching staffs to do that, and Atlanta is a hard team to get ready for. They do a number of different things, both offensively and defensively.”