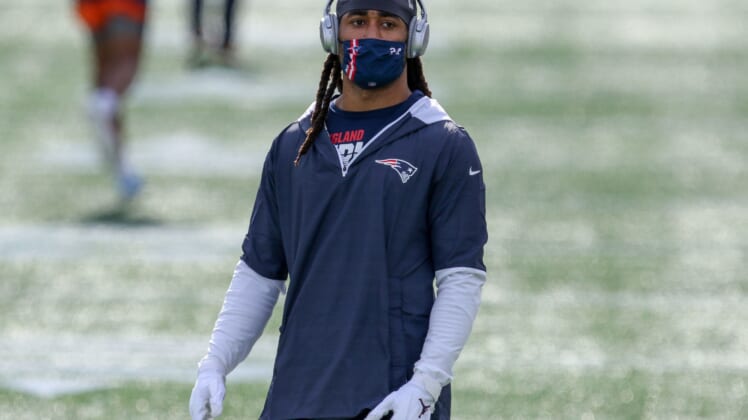 The New England Patriots hoped Stephon Gilmore would be healthy and signed to a new contract before Week 1 this fall. Instead, the All-Pro cornerback is sidelined to begin the year and he might have played one of his final games in the Patriots’ secondary.

Gilmore, a four-time Pro Bowl selection, skipped minicamp in an attempt to land a multi-year contract. When training camp arrived without a deal in sight, the 30-year-old reported for practices and then sat out camp. He was later placed on the reserve/PUP list, ruling him out for six games, a week before the regular season kicks off.

An incredibly valuable piece of the Patriots’ defense, Gilmore was the subject of NFL trade rumors last season and during the offseason. With Bill Belichick now prepared to play without him for the first six games, it’s possible Gilmore’s days in New England are numbered.

According to ESPN’s Dan Graziano, the Patriots haven’t ruled out trading Gilmore. While nothing is reportedly imminent, New England might decide his fate depending on how its first six games unfold.

With that in mind, let’s examine three potential trade destinations for the All-Pro cornerback.

One thing is evident in 2021, the Green Bay Packers are in win-now mode. Bringing Aaron Rodgers back and restructuring contracts to create cap space this year make this team’s intentions evident. If the Packers are going to put all their chips on 2021, a Gilmore trade makes sense.

Yes, Green Bay would miss the benefit of having Gilmore for at least six games. But matchups against the New Orleans Saints, Detroit Lions, Pittsburgh Steelers, Cincinnati Bengals and Chicago Bears can easily be won without him. Once he is healthy, a corner tandem of Gilmore and Jaire Alexander, paired with the surrounding talent, creates an elite defense.

The Tennessee Titans receive a little credit for trying to improve their defense this offseason, but it wasn’t enough. There’s no denying this team boasts an offense capable of competing for a Super Bowl, but its lack of talent on the other side neutralizes any realistic hope of that happening. That’s where acquiring Gilmore might change things.

Belichick might not be against trading his top cornerback to an AFC contender, but he’d certainly prefer it not be someone like the Kansas City Chiefs or Buffalo Bills. A deal with old friends Mike Vrabel and general manager Jon Robinson, that’s acceptable. Gilmore becomes Tennessee’s top cornerback and helps this defense become respectable.

While the Seattle Seahawks just traded away a cornerbacks, needs at the position can always pop up. Besides, this team is in a similar spot as the Packers and needs to surround Russell Wilson with as much talent as possible to have a shot at the Lombardi Trophy.

Adding a player like Gilmore makes life easier for everyone. Seattle gains a No. 1 cornerback who can shadow top receivers in man coverage and contain them. That allows Jamal Adams to focus on rushing the passer, an area of weakness on this defense. It would be an aggressive move, but we know this front office is never afraid to take a big swing.