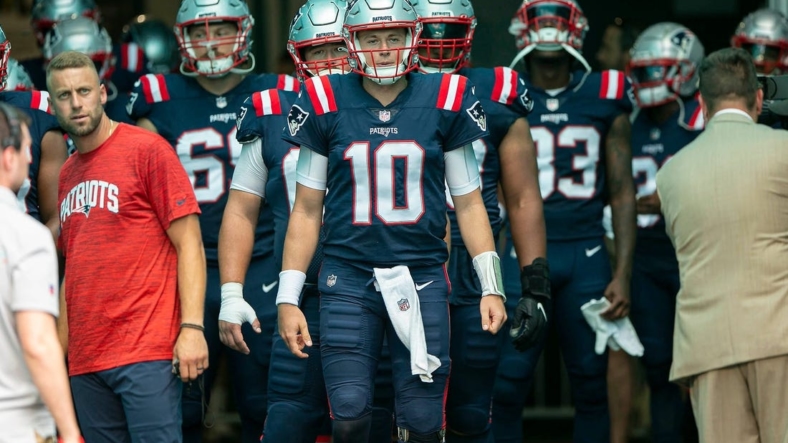 A new generation of New England Patriots strive to stretch the franchise’s recent dominance of the host Pittsburgh Steelers on Sunday afternoon.

However, all six of those victories came with Tom Brady under center.

Second-year quarterback Mac Jones will try to pick up where Brady left off. Jones will have to do so coming off a setback at Miami. He completed 21 of 30 passes for 213 yards with a touchdown and an interception in the Patriots’ 20-7 loss to the Dolphins. He also injured his back and needed X-rays after the game, which came back negative. He was a full participant in Wednesday’s practice but will be monitored throughout the week.

“I definitely feel better and yeah, I want to be able to be ready to play against Pittsburgh,” Jones said. “Wasn’t feeling too hot after the game, but definitely feel a lot better.”

A pivotal piece of the Pittsburgh offense is also hurting. Running back Najee Harris sustained a foot injury in Week 1. Tests came back negative and he is expected to play despite being limited in practice on Wednesday.

Harris ran for just 23 yards on 10 carries in Pittsburgh’s season opener against the Cincinnati Bengals, but the Steelers were still able to pull out a thrilling 23-20 win. Chris Boswell provided the late heroics, putting a 53-yard field goal between the uprights as time expired in overtime.

If Harris can’t play, the Steelers would turn to undrafted rookie Jaylen Warren. Warren was solid in blitz pickup and logged three carries but totaled just seven yards, setting up this brisk assessment of his Week 1 performance from Steelers coach Mike Tomlin: “He didn’t urinate down his leg and that’s a great place to begin.”

Much like the Patriots, somebody new directs the offense for the Steelers.

Mitchell Trubisky is in his first season with the Steelers, taking over for longtime starter Ben Roethlisberger, who had to endure New England’s success against his team under Brady. Trubisky had a turnover-free debut, throwing for 194 yards and a touchdown on 21-for-38 passing against Cincinnati.

“They have a mode of operation, they attack you in all three phases,” Tomlin said. “They play stingy defense, they keep the point totals down, they play great at situations, they win possession downs.”

The Steelers could have the upper hand if their defense plays like it did against Cincinnati. Pittsburgh intercepted Joe Burrow four times, including a pick-six, and recorded seven sacks and one fumble recovery.

Ty Montgomery, who was on the receiving end of the Patriots’ only touchdown against the Dolphins, was placed on injured reserve Monday. Receiver Lil’Jordan Humphrey was elevated from the practice squad.

Steelers linebacker T.J. Watt did not practice on Wednesday with a pectoral injury expected to limit him for multiple weeks. Cornerback Levi Wallace and center Mason Cole were both limited due to ankle injuries, and linebacker Rob Spillane (eye) was a full participant.