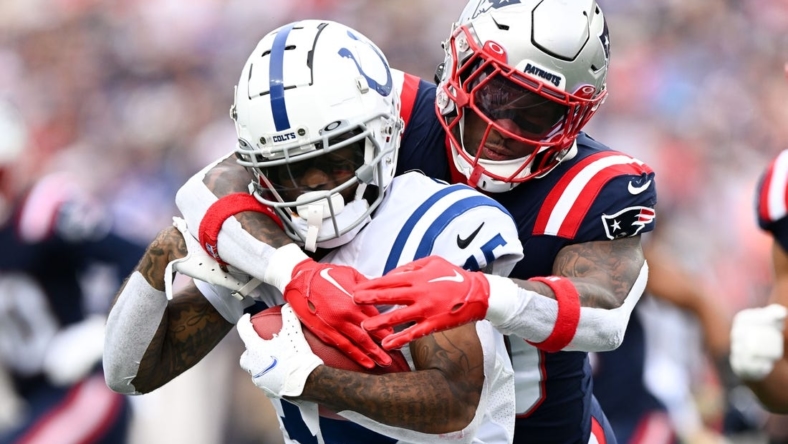 Matthew Judon, Josh Uche and Jonathan Jones headlined a masterclass defensive effort that lifted the New England Patriots to a 26-3 victory over the Indianapolis Colts on Sunday afternoon in Foxborough, Mass.

Judon and Uche each had three sacks for the Patriots (5-4), who totaled nine as a team. Jones blocked a punt and returned an interception for a touchdown to launch New England over .500 for the first time this season.

Patriots quarterback Mac Jones completed 20 of 30 passes for 147 yards and a touchdown, while Sam Ehlinger finished with 103 yards and an interception on 15-of-29 passing for the Colts.

After Jakobi Meyers fumbled with 12:40 left in the third, the Colts drove down to the Patriots 13, but had to settle for Chase McLaughlin’s 40-yard field goal for their only points of the game.

New England answered with Nick Folk’s field goal from 43 yards out to reclaim a 13-point advantage.

Folk tacked on a 28-yard field goal early in the fourth to put the game out of reach.

Jonathan Jones blocked Matt Haack’s punt midway through the second quarter, and Brenden Schooler recovered the loose ball to set the Patriots up at the Indianapolis 2.

The Colts had a chance to pull within 13-3, but McLaughlin missed a 39-yard field goal with 18 seconds left in the first half. Indianapolis totaled just 64 yards before the break.

Both teams’ offenses were stagnant through the first 15 minutes of action, combining for just 44 yards of total offense.

Folk’s 49-yard field goal put the game’s first points on the board with 13:30 left in the second quarter. He added a 43-yarder about five minutes later to give the Patriots a 6-0 edge.