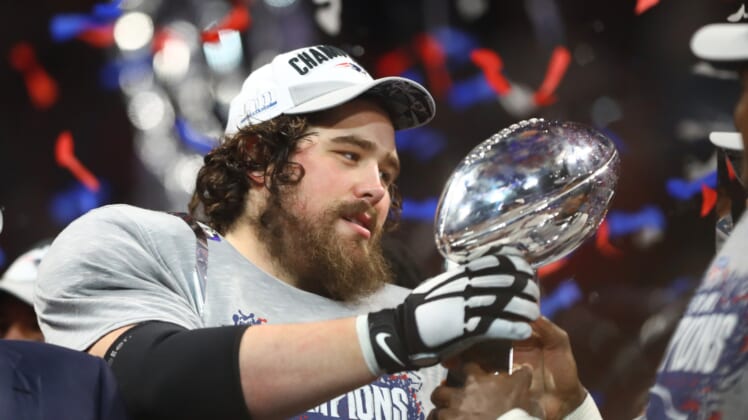 New England Patriots starting center David Andrews was forced to miss the entire 2019 season. Back in August last summer, he was hospitalized with blood clots in his lungs.

Less than one year later, things are looking up for Andrews.

On Tuesday, Andrews opened up a bit about his mindset following last year’s season-ending health emergency. He said, “you can’t live your life in fear if it’s going to happen again or not,” and said he’ll be fully ready for the 2020 season.

“I’m cleared to play football,” Andrews said, per MassLive.com. “I want to move forward with that and talk about football. What happened happened. You can’t live your life in fear if it’s going to happen again or not. It’s a violent game and things happen. There’s a lot of things that happen. That’s just life.”

When asked if he would have any restrictions, Andrews replied, “I haven’t been told that.”

“Part of it was the medicine I was on and I’m off that medicine so I can go about living my normal life. . . . I think it was just kind of a freak accident thing.”

Andrews was a a full-time starter for the Patriots from 2015-2018. He started 57 games during that stretch, helping New England win two Super Bowls.

Recently, Andrews made it clear he will be back to play for the Patriots this coming season. He’ll slide right back into his old role in 2020, assuming the blood clots that cost him last season do not come back.