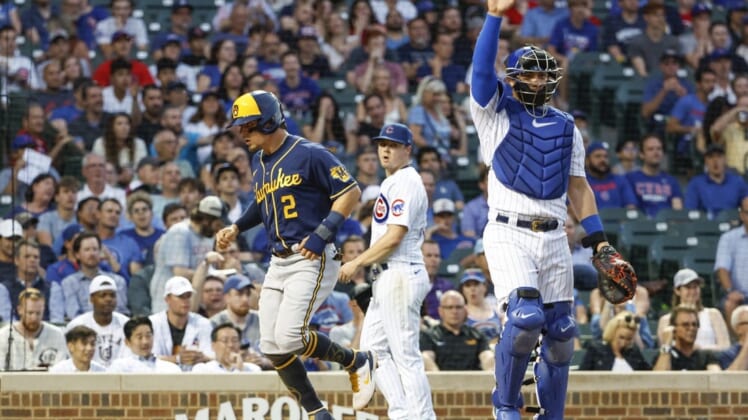 Patrick Wisdom hit a go-ahead, solo home run in the bottom of the eighth inning as the Chicago Cubs bested the visiting Milwaukee Brewers 8-7 on Tuesday night to snap a three-game losing streak.

It was Wisdom’s 11th homer of the season, and it came off Brad Boxberger (1-1), who tossed one inning of relief in the back-and-forth affair.

After Victor Caratini hit a three-run homer to put Milwaukee up 6-3, the Cubs struck for four runs in the sixth inning behind a two-run home run from P.J. Higgins and RBI doubles from Wilson Contreras and Frank Schwindel.

The Brewers immediately responded in the next half inning. Christian Yelich tripled with one out and scored on Rowdy Tellez’s hit to tie the contest at 7-7.

Mychal Givens (4-0) held Milwaukee scoreless through 1 1/3 innings out of the bullpen before David Robertson took over in the ninth and recorded his seventh save.

Contreras, Wisdom and Clint Frazier each had a pair of hits to lead Chicago, while Tyrone Taylor and Caratini each drove in three runs to pace the Brewers.

Taylor initially broke the game open in the third, doubling with the bases loaded to give Milwaukee a 3-1 lead.

That lead did not last for long, as Chicago struck for a pair of runs in the fourth.

Andrelton Simmons had an RBI single and later came around to score thanks to a throwing error from Caratini, who was attempting to pick off Christopher Morel at first base.

The rally forced Eric Lauer out of the game after four innings. He allowed five hits and three runs, two of which were earned. The left-hander also walked three and struck out six.

Contreras hit a solo home run in the first to get Chicago’s offense going early. Ian Happ tripled and Frazier walked to lead off the following inning, but Lauer retired the next three batters to escape the jam.