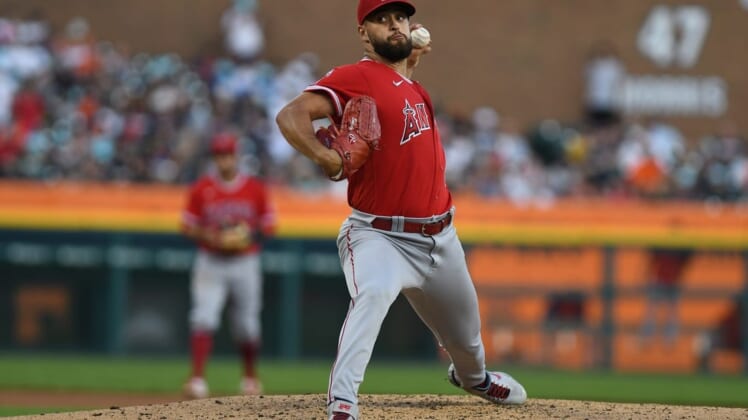 Patrick Sandoval outdueled Matt Manning and tossed the first complete-game shutout of his career as the Los Angeles Angels edged the host Detroit Tigers 1-0 on Friday.

Sandoval (4-8) held Detroit to four hits and didn’t walk a batter for the first time in 20 starts this season. Sandoval notched nine strikeouts and required only 97 pitches to finish his gem. He hadn’t won a game since May 22.

Perennial All-Star Mike Trout was activated from the injured list and played for the first time since July 12. Trout, who was sidelined by a back injury, went 1-for-4 with two strikeouts. Kurt Suzuki was the only other Angels batter with a hit.

Manning (0-1) allowed three hits and one walk while striking out six in seven innings. The Tigers have lost 10 of their last 12 games.

The teams were playing the first game of a three-game series.

Walsh was the Angels’ first batter to reach and he circled the bases. With two outs in the second, he crushed a Manning changeup over the right field wall for his 15th homer this season.

Shohei Ohtani walked and Trout singled with two away in the third but Luis Rengifo bounced into a fielder’s choice to end the threat.

Manning sat down 13 of the last 14 batters he faced, finishing his evening by striking out Jo Adell.

Sandoval, meanwhile, fanned five batters in a row late in the game. He struck out Javier Baez on three pitches, then fanned Eric Haase to end the seventh. Sandoval then struck out Miguel Cabrera, Kerry Carpenter and Jonathan Schoop in the eighth, needing just 12 total pitches.

The Tigers’ Victor Reyes slapped a one-out single in the bottom of the inning before Riley Greene bounced into a game-ending double play.