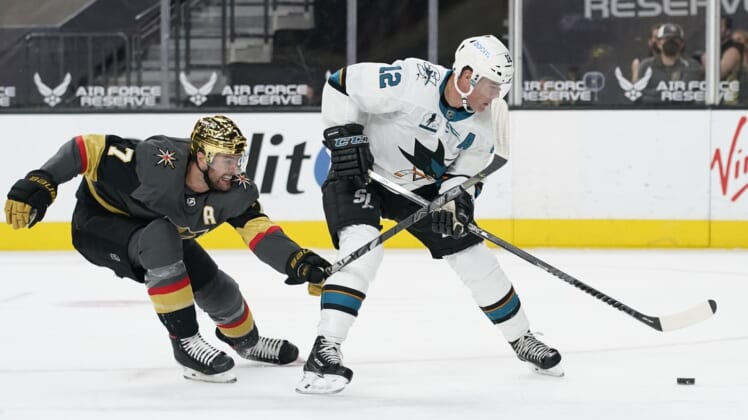 Robin Lehner made 29 saves and stopped all three shootout attempts as the Vegas Golden Knights, on a night that San Jose’s Patrick Marleau played in his 1,768th game to pass Gordie Howe and etch his name in the NHL record book for most games played, won their seventh straight game, 3-2, on Monday night in Las Vegas.

Alex Tuch scored the game-winner in the first round of the shootout and Mark Stone scored two goals for Vegas, which moved into sole possession of first place in the West Division two points ahead of idle Colorado. The seven-game winning streak is just one shy of the team record of eight in a row just prior to the pandemic pause last season.

It was the fifth consecutive multi-point game for Stone. Max Pacioretty and Shea Theodore each had two assists while Lehner improved to 11-1-2 for the season.

Nikolai Knyzhov and Noah Gregor scored goals while Martin Jones finished with 38 saves for the Sharks.

The 41-year-old Marleau, who also was playing in his 899th consecutive game, moved past Howe, who had held the record since Nov. 26, 1961 when he played his 1,000th game. Marleau, who made his NHL debut on Oct. 1, 1997, started the contest and the game was paused at the first stoppage in play for a special video acknowledgement of the record by NHL commissioner Gary Bettman.

“Just extremely grateful for all the support everyone’s given me throughout my career,” Marleau told NBC Sports California afterward. “I don’t know how many calls or texts I’ve got. It’ll take me a week to get back to them. It’s been overwhelmingly humbling, to say the least.”

San Jose took a 1-0 lead midway through the first period when Knyzhov scooped up a puck along as the boards near the left point and then rifled a snapshot through traffic and over Lehner’s right shoulder for his second goal of the season.

Marleau had a chance to make it 2-0 a few minutes later when he broke in on a breakaway but Lehner turned away his backhand try.

Gregor made it 2-0 early in the second period with his fourth goal of the season, spinning and firing a shot from the right circle that bounced off Lehner’s glove and into the net.

But Vegas came back to tie it on a pair of power-play goals by Stone, the first 53 seconds after Gregor’s goal on a deflection of Theodore’s point shot. The second came early in the third period when he took a Pacioretty pass by the left side of the goal and then whipped a shot around Jones inside the far post for his 17th goal of the season.