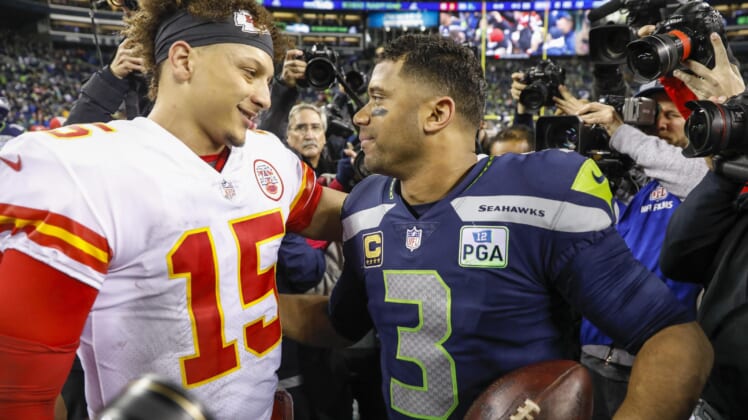 One week after the senseless, brutal death of George Floyd, Russell Wilson and Patrick Mahomes both came out with statements against the violence of people of color in America.

Wilson, quarterback of the Seattle Seahawks, expressed rage over having watched the video of Floyd being brutalized by the police officer in Minneapolis.

“The video of George Floyd broke my heart,” Wilson wrote. “Seeing someone’s life being taken so cruelly makes us want to rage and lash out. But then I ask myself, what would George Floyd want? He told us. He just wanted his mother. He wanted his life. He simply wanted to breathe. Ahmaud Arbery simply wanted to go for a run. Breeonna Taylor wanted a peaceful night at home. Dr. Martin Luther King Jr., wanted us to have a dream.”

Wilson also challenged everyone to love and wrote, “We can make a change. WE MUST MAKE A CHANGE. BLACK LIVES MATTER. God loves color. He loves us all. He loves you. He loves me.”

A short while later, Kansas City Chiefs superstar Mahomes issued a statement of his own. In it, he shared that he’s been blessed to have grown up in a family with a black father and white mother where he was accepted for who he is. He also shared that he’s experienced tremendous joy in a locker room full of people “from every race, every background and every community” that was able to come together for a common cause.

Mahomes also condemned the “senseless murders that we have witnessed.”

“I hope that our country can learn from the injustices that we have witnessed to become more like the locker room where everyone is accepted,” Mahomes wrote.

Many other professional athletes have used their influence to share their rage and sadness, along with messages of love and unity during this incredibly challenging time in America.