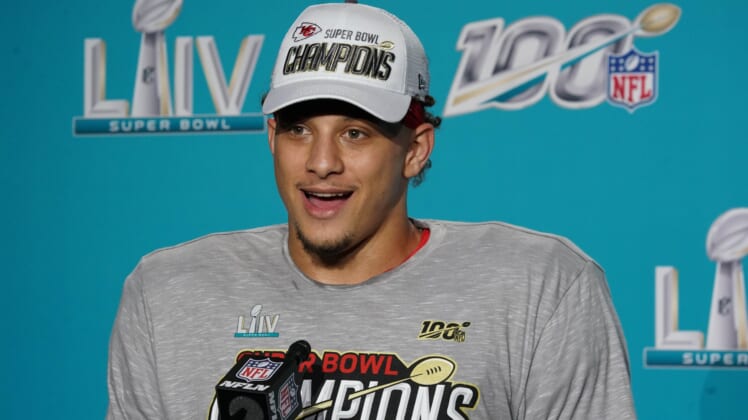 Patrick Mahomes is enjoying the NFL offseason with a Super Bowl ring on his finger and a record-breaking contract extension looming. Now the NFL’s top quarterback is revealed why football fans might still only be seeing a glimpse of what’s to come and why NFL defenses could be in even more trouble in the future.

During an appearance on HBO’s The Shop, Mahomes revealed that he just learned how to read NFL defenses and react to them during the 2019 season because he only started playing quarterback a few years ago.

“I didn’t understand how to read defenses until like halfway through last year,” Mahomes said, via The Shop. “I understood coverages. But how to be able to pick up little tendencies defenses do, that Brady and them have done, that they just do it, I was just playing.

Keep in mind, Mahomes won the NFL MVP in 2018 when he threw for 5,097 passing yards with 52 total touchdowns. He did all of that without being able to really read NFL defenses and react to them.

After really just starting to learn the quarterback position as a junior in high school, Mahomes has made incredible strides. But it’s the physical talent that has carried his game early in his NFL career and he now says he believes he’s about to make major strides with the mental aspect.

“This year, I could actually recognize more and more stuff,” Mahomes said, via The Shop. “I think the more experience and the more I learn, then I’ll be able to go out there and call plays and do that different stuff because I’ve seen it and I think there’s a long way for me to go there.”

Needless to say, we’re excited to see how Mahomes approaches this offseason and the strides he will make reading and reacting to what defenses show.

He’s already won a Super Bowl ring and an NFL MVP award in his first two seasons as a starter, we can only imagine what he’ll do in the years to come.