Kansas City Chiefs quarterback Patrick Mahomes was last seen on a football field running for his life in a 31-9 Super Bowl LV loss to the Tampa Bay Buccaneers, but with a fresh start this coming season, the superstar is feeling great physically and mentally.

Mahomes was dealing with a turf toe injury during last year’s postseason, yet still managed to guide the Chiefs to a Super Bowl berth for a second straight year. In an interview with NFL Network on Thursday, Mahomes’ post-surgery update was extremely optimistic, per NFL.com’s Kevin Patra:

“The toe’s feeling great. […] I’ve been running, cutting, jumping, throwing, doing it all. So I’m just excited to get back to training camp and have another chance to make a run at it and win the Super Bowl this year. […] The beautiful thing about the NFL is every single year, you start from scratch. […] Win or lose that Super Bowl the last two years, we still have that same mentality of we’re going to start from scratch and build and try to find a way to get back to that game.”

For as great as Mahomes has been since taking over as the Chiefs’ starting QB in 2018, he’s had his fair share of injuries to fight through. However, in that span, Mahomes has only missed three total starts, and one of them was in Week 17 this past season, when Kansas City was resting key starters.

All 32 NFL fan bases have the right to be optimistic entering training camp every year. The reality is, every organization but one is going to end the season disappointed, and for the majority of fans, they won’t see their teams even make the playoffs.

But as long as Mahomes is under center for the Chiefs, they have to feel like every single season is championship or bust. 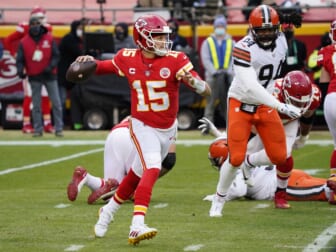 Why Patrick Mahomes can be better than ever in 2021

The rest of the NFL should shudder at that line above.

Mahomes is an absolute wizard at manipulating the pocket, escaping to extend plays with his legs, and throws the ball from mind-bending arm angles that seem to defy conventional physics. What’s crazy is, he has a lot of room to improve.

For yet another hiring cycle, Kansas City offensive coordinator Eric Bieniemy was passed up for a head coaching job. He’s back on the Chiefs’ staff with Andy Reid, so there’s valuable continuity that remains intact.

So not only will Mahomes’ continued study of the game improve, but he and the offensive coaches can continue finding new ways to create big plays, and break fresh ground to keep opposing defenses off balance.

The Chiefs’ offensive line got exposed in Super Bowl LV, mainly due to injuries. General manager Brett Veach was proactive about improving that unit this offseason, trading for left tackle Orlando Brown Jr., signing Joe Thuney and Kyle Long in free agency, and drafting Oklahoma center Creed Humphrey in the second round.

If all the pieces come together up front, Kansas City’s pass protection should improve — and even more importantly, its run blocking figures to take a step up, too.

According to Football Outsiders, first-rounder Clyde Edwards-Helaire had the 15th-worst DVOA among qualifying tailbacks, and the Chiefs’ power running success rate was an NFL-worst 51%.

Edwards-Helaire still averaged 4.4 yards per carry overall and had 803 yards rushing. Provided he takes a step forward behind better interior blocking and helps Kansas City become more balanced, that opens things up even more for Mahomes and the team’s electrifying passing attack.

Add all that up, and you could get a second league MVP year from Mahomes in 2021 very easily.