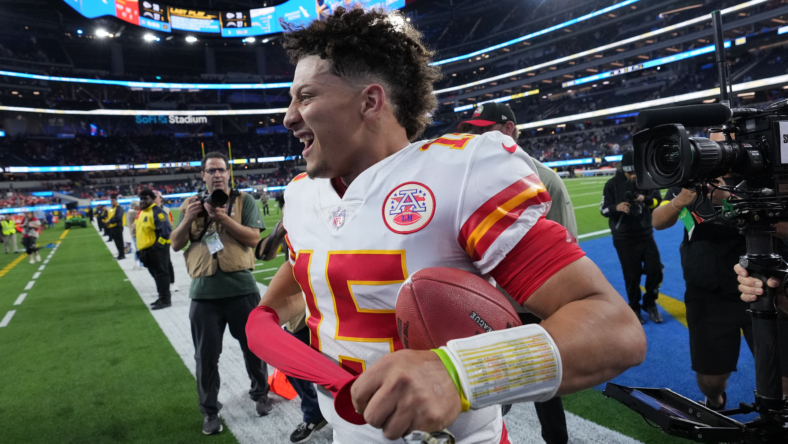 Patrick Mahomes did his thing for the AFC-best Kansas City Chiefs on Monday night, leading the team back from a late-game deficit against the Los Angeles Chargers to pretty much wrap up the division title.

Mahomes’ performance drew rave reviews as he led Kansas City on a 75-yard touchdown-scoring drive culminating in a game-winning score to Travis Kelce. It was yet another eye-opening outing for the fomer NFL and Super Bowl MVP.

Now through 10 games, Mahomes is on pace to place himself in the record books once again. He enters Week 12 against the defending champion Los Angeles Rams having thrown for a league-best 3,265 yards.

That’s an average of 326.5 yards per game, putting the quarterback in pace to break Peyton Manning’s single-season record of 5,477 yards set back in 2013 when he was a member of the Denver Broncos.

As NBC Sports’ Mike Florio points out, Manning accomplished that feat in 16 games. At his current pace, Mahomes would break the record in Kansas City’s 17th outing. It’s one of the issues the NFL knew would come up when it added a game to the schedule last season.

At his current rate, Mahomes is on pace to throw for 5,551 yards. It would represent his second career 5,000-yard season behind the quarterback’s MVP performance as a sophomore back in 2018. It would also put Mahomes on another list of all-time greats.

The NFL’s pass-first mentality has changed the dynamics in recent years. The same thing can be said about league-wide rules that make it more difficult to defend the pass. Hence, why the eight all-time single-season marks have all been set within the past dozen years.

Even then, that doesn’t take away what Mahomes has been able to accomplish since Kansas City made him a first-round pick in the 2017 NFL Draft.

At just 27 years old, Mahomes has thrown for 22,256 yards in his career. That’s come in 73 career starts. To put this into perspective, he will likely break Len Dawson’s all-time Chiefs record for passing yards at some point next season. That’s insane stuff.