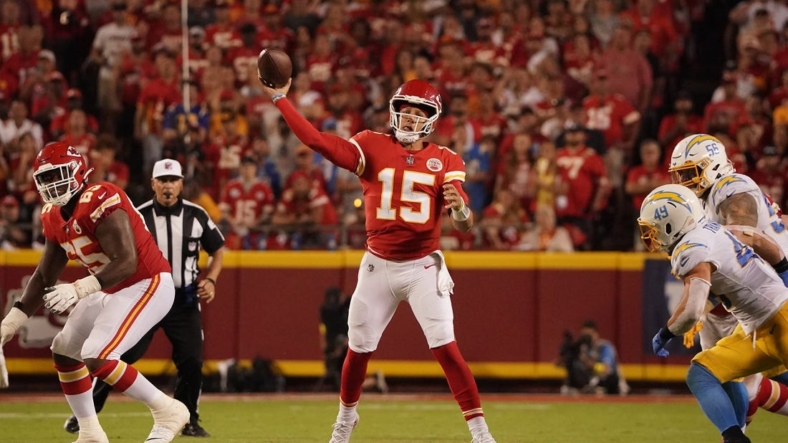 The Indianapolis Colts are surprisingly winless and face a tough test when they host the Kansas City Chiefs on Sunday.

The offseason acquisition of quarterback Matt Ryan led to high expectations for the Colts (0-1-1), but they bottomed out quickly with a tie against the Houston Texans and an ugly 24-0 loss to the lowly Jacksonville Jaguars.

Now Indianapolis is feeling the heat from the poor start as it plays one of the AFC’s top teams in Kansas City (2-0).

“I certainly had high expectations coming in,” said Ryan, who was acquired from the Atlanta Falcons. “And you certainly don’t think you’re going to be 0-1-1. That’s just not in the competitor’s mindset. We are where we are, and I think being realistic about where we’re at is important. It has to be brutal honesty.”

Ryan threw three interceptions and was sacked five times in the loss to Jacksonville. The Colts had just 218 yards and nine first downs.

Indianapolis head coach Frank Reich said there is no need to panic.

“We look at a bad loss, and you have to resist temptation to overreact,” Reich said. “Every great coach I’ve been around, I hear the same thing. It’s not about making things more complex or making overhaul changes. We just have to do it better.”

The Colts only need to look back one season to recall how damaging a poor start can be. Indianapolis dropped its first three games to make it an uphill climb and later lost its last two games to narrowly miss a playoff berth.

Kansas City is off to a strong start while pursuing its eighth consecutive postseason berth.

The Chiefs averaged 35.5 points while beating the Arizona Cardinals and Los Angeles Chargers in their first two games.

Quarterback Patrick Mahomes is completing 73 percent of his passes for 595 yards, seven touchdowns and no interceptions.

The fast start continues a career-long pattern for Mahomes. He has thrown 48 touchdown passes against three interceptions in 15 September starts. The Chiefs are 13-2 in those games.

Mahomes points to the offseason and training camp as the reason for the pattern of early success.

“I think it’s how we do training camp,” Mahomes told reporters. “It’s hard. I mean it’s hard for everybody, but I think it prepares you to be ready Week 1. Then you go out there and just execute. Coach (Andy Reid) has a great game plan in, you have guys flying around that are ready to go, ready to play a game.”

Travis Kelce has a team-best 13 receptions to raise his career count to 717, sixth most all-time among tight ends. Kelce passed Jimmy Graham (713) during last Thursday night’s 27-24 win over the Chargers.

A big play in the victory over the Chargers occurred when rookie cornerback Jaylen Watson intercepted Justin Herbert and returned it 99 yards for a score.

“It was a surreal feeling,” Watson said. “I just feel so grateful and blessed to even be in this position.”

Kansas City will be without linebacker Willie Gay, who was suspended four games by the NFL for a violation of the league’s personal conduct policy. Gay was penalized for an offseason incident.

The Chiefs were without defensive end Mike Danna (calf) and kicker Harrison Butker (left ankle) at Wednesday’s practice. Butker missed the game against the Chargers. Wideout Mecole Hardman (heel) was a limited participant.

Colts star linebacker Shaquille Leonard (back) was a full practice participant on Wednesday, and it will be decided later this week whether he’s ready to make his season debut.