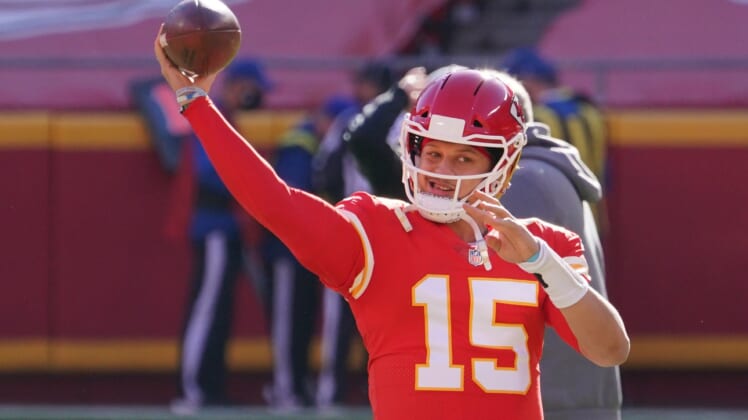 Patrick Mahomes just led the Kansas City Chiefs to back-to-back Super Bowl appearances, and then saw both his starting offensive tackles get released.

Nevertheless, the NFL and Super Bowl MVP is continuing to put the team first by reworking his historic contract to save $17 million in 2021 salary cap space.

ESPN’s Adam Schefter broke down the details of Mahomes’ contract adjustment, which comes only one offseason removed from when he signed his 10-year extension:

Field Yates of ESPN broke down just how much Mahomes is helping out the Chiefs despite how lucrative his contract ultimately is:

It’s going to be interesting to see what other cost-cutting measures the reigning AFC champions will take, and which of Mahomes’ teammates might follow his lead in restructuring their deals so that the Chiefs can gear up for another Super Bowl push this coming season.

Other obvious restructure candidates include explosive receiver Tyreek Hill, All-Pro tight end Travis Kelce and defensive end Frank Clark, all of whom could save Kansas City a serious chunk of change in the near term.

There’s always a balance to strike, because diverting too much money to 2022 could create cap constrictions that leaves the Chiefs in a tough spot next offseason. That said, Mahomes is a huge domino to fall in this potential trend.

As Schefter mentioned in his report, the QB who defeated Mahomes’ Chiefs in Super Bowl LV, Tom Brady, overhauled his contract to save the Bucs $19 million this year.

Kansas City is just a little over $4 million in the red against the 2021 cap, and now the team will have much greater financial flexibility as it looks to rework the roster through free agency and then the draft next month.

The obvious priority is going to be the offensive line. With an All-Pro right tackle in Mitchell Schwartz and a former No. 1 overall pick at left tackle in Eric Fisher both out the door, Mahomes could be running for his life. Suddenly, the Chiefs’ seemingly unstoppable passing attack could look pretty pedestrian.

Is general manager Brett Veach going to count on a potential first-round rookie to fill one of the tackle spots? What sort of free-agent veteran can be had who’d actually fit under the team’s cap? Not exactly easy times right now as Veach and his scouts try to sort through such a dilemma.

Another factor to consider is the pending free agency period, wherein K.C. receivers Sammy Watkins, Byron Pringle and Demarcus Robinson all hit the open market. The latter two shouldn’t command prohibitive costs to keep, yet every dollar counts at this point, and Watkins is likely to be retained.

The trio of Mahomes, Hill and Kelce will always make the Chiefs dangerous. However, losing so much depth in the receiving corps without a clear plan to replace anyone is alarming, as is the fact that the o-line struggled to run block last season. As a result, tailback Clyde Edwards-Helaire didn’t provide the necessary boost and balance Kansas City was hoping to add to its offense.

In order to consistently compete for a Super Bowl, it’s of paramount importance for Mahomes to be protected. He likes to extend plays and can put himself in harm’s way at times regardless of the pass protection, so replacing seasoned pros like Fisher and Schwartz is going to be no easy task.

It’ll probably take some schematic adjustments from head coach Andy Reid and offensive coordinator Eric Bieniemy in the form of a stronger commitment to the run and quicker, rhythm throws in the passing game to optimize Mahomes’ chances for success in 2021 as the roster stands now.