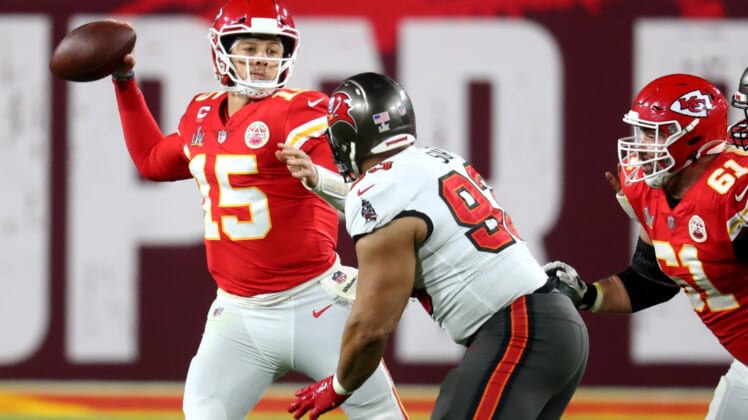 The dust has barely settled from Super Bowl LV and all eyes have turned back to Patrick Mahomes.

Despite seeing his Kansas City Chiefs come up short in the big game last week, Mahomes has been installed as the early favorite to win NFL Most Valuable Player honors for the 2021 season.

Mahomes, 25, is expected to be motivated after throwing for 4,740 yards and 38 touchdowns during the regular season before enduring one of the worst games of his NFL career in last Sunday’s 31-9 loss to the Tampa Bay Buccaneers. He completed 26 of 49 passes for 270 yards with no touchdowns and two interceptions in Super Bowl LV.

Reigning NFL MVP Aaron Rodgers of the Green Bay Packers resides at +800 to capture his fourth such award.

Fellow quarterbacks Josh Allen (Buffalo Bills) and Russell Wilson (Seattle Seahawks) are both listed at +1300 to win the 2021 NFL MVP.

Los Angeles Rams quarterback Matthew Stafford is fifth on the list at +1500 following his trade from the Detroit Lions.

Super Bowl MVP Tom Brady of the Buccaneers sits at +1600 to win his fourth NFL MVP honor, while Baltimore Ravens quarterback Lamar Jackson has the same odds to capture his second in three years.

The first non-quarterbacks on the list are Tennessee Titans bulldozer Derrick Henry and fellow running back Christian McCaffrey of the Carolina Panthers. Both are at +3300.