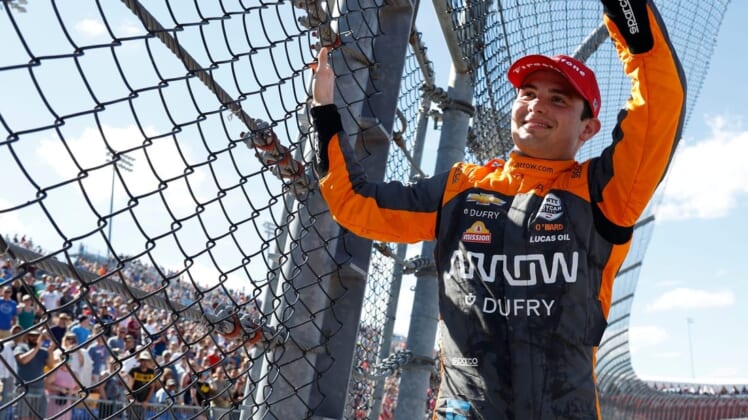 Pato O’Ward of Mexico recorded his second win of the season when he prevailed at the Hy-Vee Salute to Farmers 300 on Sunday at Iowa Speedway.

Josef Newgarden’s crash on Lap 235 of the 300-lap race in Newton, Iowa opened the door for O’Ward to take over in his McLaren Chevrolet. He won by 4.2476 seconds over Australian Will Power of Team Penske.

“Super stoked, super happy,” O’Ward said afterward. “I knew we had a great car, but that was just capitalizing and being there when it counted.”

Newgarden led for 148 laps prior to his misfortune with his Penske Chevrolet.

Newgarden felt a mechanical issue in the car in Turn 4 and the car suddenly shook and spun, tossing the vehicle out of control before it slammed into the outside well with its left rear side.

“Definitely was a bit of a shot,” Newgarden said. “I want to cry, so sad for my team. I don’t know what happened. “Everything felt fine to me. Totally unexpected and it caught me by my surprise.”

Newgarden later fainted and fell to the ground. He was taken to the track medical center and then airlifted to a hospital 35 miles away in Des Moines as a precaution.

“I race my teammates with the most respect I possibly can, every race I’ve been in,” Johnson said. “That was really the first time I fought for position and felt like I should have been up there passing (Dixon). Today I had it in me and I raced clean, hard, and just had an awesome day.”