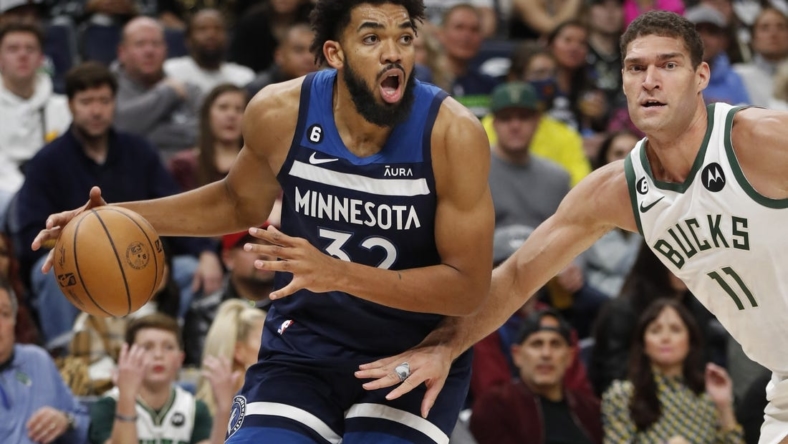 Minnesota opened its home stretch on Friday dropping a 115-102 decision to the Milwaukee Bucks, the third straight loss for the Timberwolves. They rebounded in the second leg of the weekend back-to-back on Saturday, outpacing the Houston Rockets 129-117.

Seven Wolves scored in double figures Saturday, including all five starters. The 129 points mark the second-most by a Timberwolves’ offense that has struggled to find consistency early in the season.

Minnesota has averaged 121 points per game in wins, and 107.8 in losses. Since scoring 126 in an overtime loss to the Utah Jazz during the second game of the campaign, the Timberwolves have not scored more than 107 in any of four defeats.

The Wolves’ Karl-Anthony Towns scored a team-high 25 points on 9-of-14 field-goal shooting against Houston.

“It takes time,” Towns said, according to the Minneapolis Star-Tribune. “If anyone knows it takes time to win, it’s been me. I’ve been in Minnesota eight years now. I’ve seen it take a lot of time to see some wins happen. Things just don’t happen overnight.”

The Timberwolves played Saturday without marquee offseason acquisition Rudy Gobert, who is averaging a double-double at 12.6 points and 13.9 rebounds per game. He is in league’s health and safety protocol for COVID-19.

Otherwise at full strength, Minnesota will look to continue its offensive momentum against a New York defense that has sputtered through the opening stretch of the season.

The Knicks dropped their fourth decision in the last five games on Saturday, surrendering a season-high 133 points in a 15-point loss to the Boston Celtics. New York is giving up almost 116 points per game despite holding opponents to a collective field-goal percentage of 43.1.

That is a byproduct of the Knicks giving up almost 15 made 3-pointers per game, most in the NBA. The Celtics shot a blistering 27 of 51 from beyond the arc in Saturday’s rout.

“Some are in transition, not identifying that you got to protect the basket first, but you also got to mark the shooters,” Knicks coach Tom Thibodeau said. “You got to be there on the catch. Take airspace away, make them put it on the floor.”

Offensively, New York has been balanced and effective enough to record more than 114 points per game, paced by a trio of RJ Barrett, Jalen Brunson and Julius Randle. All three have averaged between 18.9 and 19.3 points per game.

Shooting the 3-pointer consistently is as much of a challenge for the Knicks as defending it. Barrett, Brunson and Randle, as well as Immanuel Quickley, are shooting at least 3.8 attempts per game from long range and connecting on fewer than 30 percent each.

The Knicks’ 33 percent team-wide average ranks near the bottom of the NBA – though is just a hair worse than Minnesota’s 33.1 percent average.

Towns and Anthony Edwards, the Timberwolves leading scorers through 10 games, are both connecting on better than 36 percent from 3-point range with 6.3 and 7.9 attempts per game, but D’Angelo Russell has yet to find his form with a 27.8 percent average on 5.4 attempts a contest.