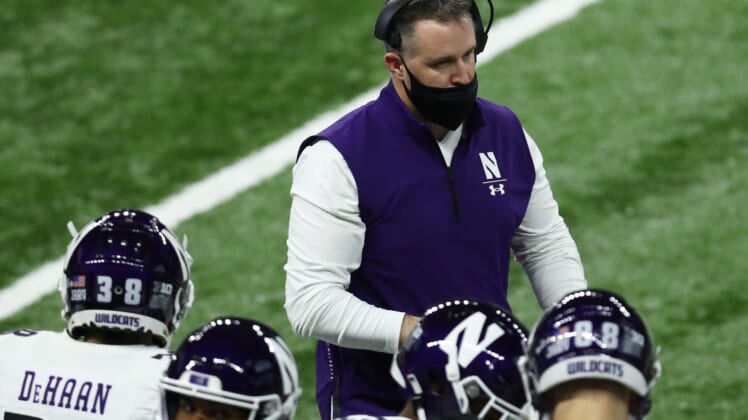 Longtime Northwestern head football coach Pat Fitzgerald is not going anywhere any time soon. After multiple NFL teams showed interest in hiring him over the past couple head-coach hiring cycles, Fitzgerald has opted to remain with the Wildcats for the long-term.

Pete Thamel of Yahoo! Sports reported on Wednesday that Fitzgerald has signed a new 10-year contract with Northwestern that will take him through the 2030 season.

This is an absolutely huge deal for the Northwestern football program. Much like other top-end college coaches, Pat Fitzgerald has shown passing interest in the NFL. However, his heart has always been with his alma mater.

Pat Fitzgerald to remain at Northwestern over long haul

Fitzgerald, 46, is a former star linebacker for the Wildcats. He played under Gary Barnett from 1993-96, helping lead that program to a shocking Rose Bowl appearance in 1995. That team made multiple players absolute legends in Evanston, Illinois. It was the program’s first bowl appearance since back in 1948.

As for Fitzgerald the head coach, he took on this role in 2006 after serving as an assistant with the Wildcats since 2001. Needless to say, it has been a smashing success.

Pat Fitzgerald has posted a 106-81 overall record with 10 bowl appearances, including a four-game winning streak in the postseason. Prior to his arrival as head coach, Northwestern had made six bowl appearances since the program’s inception all the way back in 1892.

The Chicago Bears were among the teams to show interest in hiring Fitzgerald. But when it became clear that he would remain with Northwestern, the Bears retained Matt Nagy. We’ve seen multiple other teams show interest in the highly-respected head coach as well.

At 46, Fitzgerald could end up making the jump to the professional ranks. But it’s not going to happen any time soon.