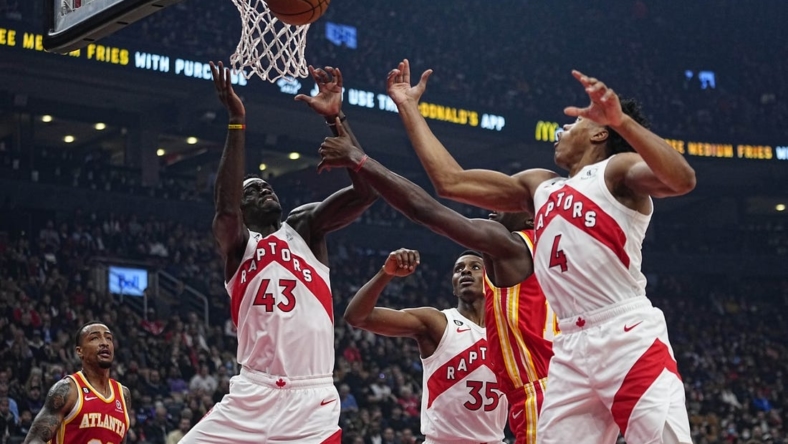 Scottie Barnes added 21 points, seven rebounds and eight assists and Gary Trent Jr. scored 21 points for the Raptors, who were playing without Fred VanVleet (back).

O.G. Anunoby had 14 points and six steals for the Raptors, who completed a three-game homestand at 2-1. Chris Boucher added 11 points and Precious Achiuwa had 10 points.

Trae Young scored 14 points and had 10 assists and committed a career-high 10 turnovers for the Hawks, who have lost two straight. Young had averaged 35 points over his three previous games.

Dejounte Murray had 20 points and nine assists for the Hawks. Clint Capela had 13 points and Justin Holiday and John Collins each had 12 points while De’Andre Hunter had 11.

The Raptors took a 15-point advantage into the fourth quarter and bumped the lead to 18 in the first 10 seconds on Siakam’s hook shot and free throw.

The lead reached 24 on Christian Koloko’s dunk with 6:51 to play in the fourth quarter.

The Raptors led 34-28 after one quarter with Barnes hitting on three 3-pointers.

Toronto used a 13-0 run to take a 12-point lead with 58.6 seconds to play in the half. Clint Capela’s hook shot completed the first -half scoring and cut Toronto’s lead to 64-53.

The Hawks opened the third quarter on a 9-2 run.

The Raptors took a 12-point lead on two free throws by Siakam with 2:45 left in the third quarter. Anunoby added a corner 3-pointer with 1:19 to play in the third.

Capela’s layup with 31 seconds remaining in the third ended a six-minute drought for Atlanta without a field goal. Toronto led 95-80 after the third quarter.